Beyond the Book: Tessa Woodward on the acquisition and publication of Lecia Cornwall’s Secrets of a Proper Countess

Normally, I’d tell you to pay no attention to the (wo)man behind the curtain, but today I’m letting you in, lifting the veil, spilling all of my secrets — my editorial ones, that is.

I’m going to take you through the editorial process from soup to nuts or, in this case, acquisition to publication. And I’m going to use a real life example — Debut Author Lecia Cornwall’s Secrets of a Proper Countess (browse inside the book), due out in April! 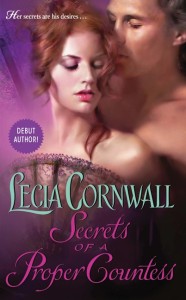 The first time I heard about this project was when I received a pitch email from the agent in October 2009. Now, this was an agent I’d worked with before and who I knew had taste that was similar to mine so I took a quick look at the pitch letter. Since I knew that I liked her taste, I was pretty sure that I was going to at least enjoy the manuscript, whether it was right for my list or not. And she definitely hooked me with the words “a sexy and dangerous Regency story.”

Side note: Now that I’ve been at Avon for a while, I’ve been able to build up relationships with particular agents who have similar tastes. It means that they’re able to pinpoint specific project that they know I’ll like and I’m able to triage my submissions. Often, if you pay attention to these kinds of things, you’ll see editors who have multiple projects with a particular agent (as I now do with Lecia’s agent as a matter of fact). It’s similar to how you’re more likely to take book recommendations from someone whose taste you trust and who knows what kinds of books you like, than from someone you’ve only just met.

Back to the submission process. After I read the manuscript and really liked it, I asked Amanda, one of my colleagues, to take a look as well. It’s always good to have more than one voice when I go in to talk to our editorial director and Amanda has an incredible eye. By this point, it’s mid-November now and the agent is “closing” on the book soon. That basically means she’s set a deadline and we have to make our offer by a certain date. Luckily, with Amanda’s support, I get the green light to make an offer.

And just like that I’m part of an auction. I make my offer and set up a time to talk to Lecia and tell her some of my editorial ideas. This is one of my favorite parts because it makes me feel like those good old days of publishing we’re always hearing about are not over. Because this is when my editorial ideas matter. And how we get along matters. And how much passion I have for the project matters.

Here’s the thing, no matter how much money I might offer, if my suggestions don’t line up with what the author is willing to do, or if she and I are completely unable to communicate, then we shouldn’t make the deal. It reminds me that it’s not just a business but that who the writer is and who the editor is are intrinsically tied into the success of the book. If we don’t connect then it’ll be that much harder to make a success together. I also like to think that if we find that we’re kindred spirits and we share a similar vision for the book and the author’s career, then we will all do everything in our powers to make the deal work.

In this case, I think it’s safe to say that the conversation went well. It helped that Lecia is Canadian and I have a longstanding love for all things Canadian. But I’m sure that’s not the only reason…

Now we wait. Because we’re planning so far in advance, the deal that we’ve just made means the first book won’t come out until April 2011. That’s about a year and a half later. I imagine this must be an incredibly frustrating time for authors (but also a good time to work on book 2!) as they live in limbo until about 9 months before the book goes on sale. That’s when the fun begins.

The editorial process is different for every book, every author, and every editor. My own particular brand involves lots of post-its that eventually resolve themselves into long letters. For this book, the hardest part of the editing process was the cutting. The manuscript was a bit too long and we worked a lot (poor Lecia!) to make it perfect. In my humble opinion, we did a great job! You’ll all have to let me know in April.

Meanwhile we had to come up with the perfect title and cover. Secrets of a Proper Countess was originally submitted as Unmasking the Countess. We generally have two meetings to talk about covers. The first is just with the editorial team when we brainstorm ideas and talk about titles. The second is with our brilliant art department who makes our vague desires (something pretty, and mysterious, and bright enough to pop off the shelf, and interesting, with beautiful people) turn into incredible reality.

At our first meeting it was decided that “Unmasking” wasn’t a sexy enough word. The sounds are a bit harsh and wouldn’t necessarily look very pretty on the page. Yes, we actually think about how the individual letters of the title will look on the page. We also wanted something that would describe the book a bit better. Thus Secrets of a Proper Countess was born. (Actually, we had at first wanted to call it Secrets of an Improper Countess but, as the author correctly pointed out, the heroine isn’t an “improper countess” at all. That’s the whole point of the book. So we chose “proper.”)

Our art director, armed with the descriptions of the characters, pulled a gorgeous and mysterious cover out of thin air and we had a book.

And then we wait again. Hoping that all of our hard work will translate into a smash when the book comes out in April.

Voila. That is my main part in the publishing process. Sure, I completely left out the sales, marketing, and publicity but I can’t go spilling all of the state secrets! Yet-

Hope that helped dispel some of the mystery surrounding the editorial process- but not too much. Can’t start having my authors believe that I’m not a magician.

Follow me on twitter @TessaofAvonlea and at www.AvonRomance.com if you want to get more insight into the publishing process.