Beyond the Book: Maya Banks on why she wrote a romantic suspense series 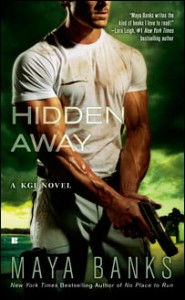 I actually began my "writing career" writing historicals. Only historicals. I couldn't envision myself writing anything else. I didn't want to write anything else. So there I am plugging along with my historicals. Frantically writing query letters, preparing partials to send out to agents and whatever editors would read me without an agent. When one day this idea came to me.

It was different. Way different. It was contemporary. And it featured this guy riddled with guilt and grieving for the wife he thought was dead. Only she wasn't dead.

I'd find myself daydreaming and building his family and his circumstances when I was supposed to be researching historical facts. I was thinking about guns and explosives rather than pretty dresses and balls. These people just wouldn't leave me alone.

Before long I knew I had to at least write some of this book so I could get it out of my head and I could go back to my historicals. So I wrote that first chapter. And the second. And the third- I was hooked and fascinated and I couldn't stop writing!

But then as with anything that occupies my concentration, stuff happens to pull me away. I found an agent who wanted to represent my historical. Dutifully I put The Darkest Hour away and focused on the matter at hand, which was to try to sell my first book to a publisher!

We submitted the book. I went back to working on more historicals, and The Darkest Hour started collecting dust on my hard drive. Then one day my agent emailed me that Louisa Edwards, who was then an editor at Berkley, was interested in my historical but she thought it needed some revising and she was interested in working on it with me.

Me excited? Nah- Louisa and I emailed back and forth. I figured out what I needed to do and I set to work ripping apart and putting the book back together. Time passed. I got the book in shape. I send it back to my agent and- nothing. Long story short, this agent thing wasn't working out and I knew it. We parted ways, I got my gumption up, emailed Louisa to tell her that I was no longer with that agent and I politely asked her for the status of my manuscript. Louisa emailed me back very promptly to tell me that she was leaving Berkley but that she'd passed my manuscript along to another editor there who loved historicals. Gina Bernal.

Okay you guys probably already know where this is headed but for those of you who don't- I waited a respectable amount of time. Worked on some more historicals. Figured out what I wanted to do with the whole agent thing. After a bit I emailed Gina for an update and well she informed me that she too was leaving Berkley.

At this point I kept thinking was my book THAT bad that I kept making editors flee the building?

I also emailed Kate Seaver after Gina's departure because she'd just moved over to Berkley and I thought maybe she would give my book a shot. But she never emailed me back. Not that I'm bitter or anything.

By now I knew this wasn't happening. I was disgusted, discouraged. I didn't WANT another agent and well I didn't want to write historicals either. I took a little time off, sulked and tried to figure out what the heck I wanted to do with my so called career. I was so burned out that I decided to do something completely different and fun. No pressure. Something for me.

But back to the RS thing? See after writing a few books for Samhain and for Berkley, I began thinking about The Darkest Hour. It was again burning a hole in my head and so I pulled it out, half fearing it was one of those things you never ever pull out of the vault. But I read it and I fell in love with it all over again.

I polished up a proposal and sent it to my agent who pitched it to my editor at Berkley and she loved it. Bought it. And wow, suddenly that book that I'd begun eons ago was finally going to be published! And better yet, I was going to get to tell the story of Ethan's family and all the interesting characters who had kept me company during some dark and frustrating days.

And so the KGI series was born.

And well if it weren't for the fact that I made both Louisa Edwards and Gina Bernal flee the building, I'd probably still be trying to sell to a publisher.

→ Jane
Previous article: What is the right price of a book, print or digital, part one.
Next Post: REVIEW: The Paris Secret by Angela Henry