“The thief who stole his heart

Sword dancer Li Feng is used to living life on the edge of the law–a woman alone in the dangerous world of the Tang Dynasty has only her whirlwind reflexes to trust. She will discover the truth about her past,even if that means outwitting the most feared thief-catcher of them all….

Relentless, handsome and determined, Han sees life–and love–as black and white. Until he finally captures the spirited, courageous Li Feng, who makes him question everything he thought he knew about right and wrong. Soon he’s faced with an impossible choice: betray the elusive sword dancer he is learning to love, or trust his long-disregarded heart and follow her to dangerous, tempting rebellion….”

I liked what I’d heard about this book: a Tang Dynasty road romance featuring a woman who knows how to handle a sword and a man who needs to loosen up a bit. Yet, it’s a lot more than that. There are rebellions, warlords, jade stealing, salt smuggling, filial duty and the role of family in China, revenge, Chinese political spin doctoring and the triumph of true love. The story shows the nitty gritty of working class life in Tang China with lots of interesting historical angles, details and characters which come together to give the book its sinew and muscle. 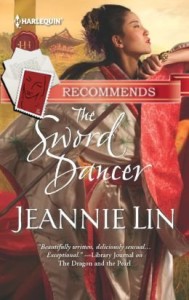 The Sword Dancer by Jeannie Lin

Still, there is so much plot happening here that at times I forgot parts of it due to the shear number of different elements being juggled, pieces being put together and stuff to remember. In spite of all this, or maybe because of all of it, the book still seemed to move very slowly at times with an almost disjointed feel. One subplot would seemingly wander off while another was introduced leaving me adrift about how on earth they were related or how they’d come together at all.

But the image of Li Feng dazzling with her sword dancing made up for a lot of this. The first Chinese sword dancing I recall seeing was actually in a production of the Puccini opera Turandot that was staged in Beijing in 1998. All of a sudden this lithe young woman in red was spinning and twirling across the stage and then – hot damn! – she had a sword and was doing all these amazing acrobatics. I zipped the DVD back and watched this woman again it was so awesome. Perhaps it is not what the heroine was actually doing in the book but I kept this what I kept in mind while reading about Li Feng.

I need more than athletic heroines expertly manipulating sharp, pointy objects and gracefully leaping across rooftops to keep my interest. Li Feng is driven to find the family she lost as a child and from this I can see how important family is to being “centered” as a person. She feels adrift and incomplete and also envious of Han who – though he’s quarreled with his father – still has a family to go home to. It’s not until she’s finished her quest and found what she’s looking for that she can be satisfied being still, allow someone into her world and reaching for her personal happiness.

Han is a man initially driven by the need to see the law upheld. Up until now this has been a right/wrong black/white distinction to him. But, as he discovers, justice should be for everyone not merely those who are rich and in power. His truncated training for a civil service job has made him a thinking man’s thief catcher. Li Feng and her situation open him to shades of gray and unable to turn a blind eye to the system anymore. The law is still worth fighting for but justice depending on the people in charge and the way it’s meted out can be flawed.

“The Sword Dancer” seemed to have a darker feel to it than “My Fair Concubine” or any of the novellas of yours I’ve read. With the tragedy in Li Feng’s past and the profession that Han pursues, that’s not surprising. As the book wound to a close, I was getting a bit nervous though as I remembered comments that has been made about how Chinese audiences expect their romances to end tragically. “She wouldn’t,” I thought. “No, no she won’t. This is a Harlequin Historical and it’s got to have a HEA.” You took it right to the final few pages but the ending is one of the sweetest I recall in a long time. B

‘I will marry you,’ she whispered, finally allowing her heart to speak. He kissed her again, deeply, with his hands framed about her face. Thief-catcher Han, the man who would not let her get away.
Their hands remained linked as they sat on the roof, side by side, to stare at the sky above. The first stars were out and a stream of lights formed overhead as the night descended.
‘I’m dreaming,’ she said to the heavens.
‘So am I,’ Han said warmly.
‘I hope I’ll make a good wife.’ She didn’t know much about being one.
‘You will,’ Han promised. ‘I hope we can both be content remaining in one place.’
‘Let’s try it. Starting now.’
Han put his arm around her and she nestled close into that perfect spot on his shoulder. For a long, long time they remained there, watching the rise of the moon and counting the stars. Sitting still. Together.