“While flying an Allied fighter plane from Paris to England, American ATA pilot and amateur poet, Rose Justice, is captured by the Nazis and sent to Ravensbrück, the notorious women’s concentration camp. Trapped in horrific circumstances, Rose finds hope in the impossible through the loyalty, bravery and friendship of her fellow prisoners. But will that be enough to endure the fate that’s in store for her?”

I enjoyed your book Code Name Verity so much that when I heard you’d have a new book out this year, I got right on obtaining a copy. Based on the blurb and what I felt after finishing “Verity,” I knew it wouldn’t be an easy book to read but I was hoping that it would be as memorable and as good. Once again, I think you’ve managed to deliver a story of courage and strength though it might be a touch intense as a YA novel. 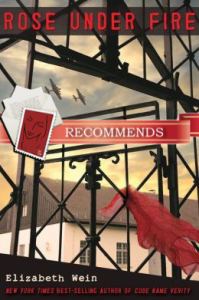 Rose Under Fire by Elizabeth Wein, recommended by Jayne

Last year, I didn’t read any other reviews of “Verity” to avoid spoilers. This year since I finished “Rose” before the release date, I didn’t have to worry about that. Still I decided to not look into the history of Ravensbruck too closely so it would be as much a shock to me as it probably would be for Rose. I had heard of the name of the camp but none of the details. The decision was a wise one because the intensity of the details was undiluted.

For all that I must say that the book gets off to a moderately slow start. Kind of like sitting on a plane which is lined up, waiting for clearance to take off and it keeps getting delayed. There is lots of exposition which is useful for those who didn’t read the first book and or know little about the ATA. Some details, such as Rose’s reaction to the doodlebugs, are important while others, such as a certain romance I was hoping to see occur between two characters from “Verity,” are a sweet gift but nonetheless, I was raring to get to the heart of the book.

But once it gets going, it’s initially like numbing shock that slowly wears off leaving you wide open to Rose’s dawning horror of what’s going on at Ravensbruck. The ways and means that figure into Rose’s survival there echo what I’ve heard in documentaries about POWs. Little things will save a life or take it. One must have a buddy or buddy system to watch one’s back. Someone with a reason to live will be more likely to remain unbroken while a way to occupy the mind helps keep mental collapse at bay.

Rose’s poetry serves to exercise her mind, help her deal with the conditions of the camp and initially connect with the group of women who will be crucial to getting her out of there alive. Later she discovers a fellow pilot who joins their “family” but first and foremost, writing and expressing her emotions through poetry helps get her through the bleakest times. I thought the details of what Rose and the others endured were more explicitly laid out and might be harder to read about than in “Verity” but since the setting is a German WWII concentration camp, I realized that it wasn’t going to be pretty. What I felt added to the impact they had on me is how understated they are. Raw, yes, but not sensationalized.

I loved the scenes of Rose’s “family” working together to make conditions just a little less hellish, to sustain each other, to defy the camp authorities when possible, to lift their spirits and keep some amount of hope alive, to save each other’s lives.

One of Rose’s tasks is to memorize the long list of Rabbit names by turning them into poetry to be sure their story is told and none are forgotten. The details of the Rabbits made me want to gather them all up in my arms and weep. The determination of the camp inmates to save these women to bear witness against the Nazis for the medical experimentation done on them made me want to cheer.

Rose’s disbelief that the Germans knew they were losing but kept on fighting is one I have always shared. Why more death and destruction with the outcome already beyond doubt? But at least the threat of the Allies’ advance and publicity over what had gone on at the camp was enough to barter for people’s lives who had ended up on the daily execution list.

One thing I think that is done exceptionally well here is in how the freed prisoners – here mainly shown by Rose – react once they’re freed. Her fear of open spaces, of making choices, of feeling overwhelmed into inactivity make sense. Her inability to speak on what happened to her, despite her best intentions, mirrors real life. The fact that her experience haunts her for years and she doesn’t begin to come to terms with it until she’s spoken again with a former camp “family” member seem realistic.

It was delightful to see some returning characters from “Verity” – Maddie and Jamie – yah!, his mother who is still taking in strays from the war, and a bit about the orphaned boys from Edinburgh. I was more ambivalent about another – Anna the German criminal/foreman in the camp – and left wondering about her ultimate fate. One thing was for certain – I wouldn’t want to be a close friend of Maddie’s and end up in German territory as the track record for these people isn’t good!

Recently I watched a documentary – The Botany of Desire – which discussed how scientists have discovered that a natural substance similar to THC is helpful to human existence in that it allows us to forget. Being able to forget some of the worst experiences of the camp is something that Rose finds to be vital. She also learns how hope – of even little things – keeps them all going. How defiance lifts their spirits. The ending is hopeful but not yet complete as Rose and the others still have a long way to go to come to terms with what they survived – and this feels right – but there appear to be some rays of sunshine breaking through the gloomy clouds. I feel relatively positive about things, even if more than a little wrung out. I doubt I could read more than one of your books in a year but I’m still glad to read that one. B