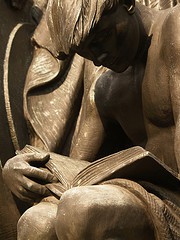 Kassia Kroszer of Booksquare fame posted on Friday an article addressing the publishing industry’s failure to recognize its own money making potential. Publishing views itself on the decline. Print newspaper book review sections have gone the way of the dinosaur. According to the article in NY Magazine, “serious readers” numbered around 120,000 fifteen years ago and have dropped by half nearly every decade which means that we are a nation of about 45,000 serious readers. Serious readers are defined by those who read every night. (It’s not clear whether “read every night” means reads a book every night or merely “reads” every night).

Kroszer points out that the decline in publishing is really a decline in the literary fiction arm of the publishing industry or the one that interests those at the National Books Critic Circle. This is likely true. Literary fiction is suffering. For example, while Oprah has revived interest in serious fiction, interest is not sustainable. Oprah does not sustain reading in general, but reading of the books that she recommends.

Change is slow for publishing.

Publishing is at a crossroads.   It is an industry that has foreseen very little change in the last century.   Mass markets were introduced in the late thirties.   According to one source, Rosemary Roger’s Wicked Loving Lies published in early 1970s was the first genre book to be put out in trade.   The most recent innovation in publishing is (notwithstanding the dreaded super mass market) is digitization.

In arguing against the long tail, Anita Elberse finds that the existing state of publishing does not support the theory that the internet can produce profitable publishing venture without relying on major titles.    Elberse urges publishers to stick with the blockbuster strategy.   The problem, as Kassia Kroszer notes, is that this strategy is primarily responsible for the broken nature of publishing.

I think publishing is fundamentally broken, mostly because a business that relies on mega-hits to justify its existence -‘ when those mega-hits are reliant upon capturing the imagination of a broad spectrum of the nation’s citizens -‘ cannot sustain itself as it exists today.

When I first read Elberse’s article, I tended to agree with her.   Publishing is grounded on the hits and dragged down by the misses.   Of course, misses are anything but the hits.     The problem is that there is an existing model of publishing that defies Elberse’s thesis that publishing can only be profitable with the “big” book.   It’s done everyday in epublishing.   There are well known authors within epublishing (some who’ve gone on to successful mainstream print publishing careers) but few could be considered a blockbuster author in mainstream publishing terms. 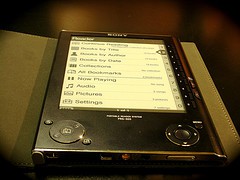 It seems to me that literary fiction should take a look at erotic romance ditigal publishers and try to emulate its success.   E publishing is more than just another medium of publishing.   It is, in fact, an entirely new business model for publishing itself.   E publishing started the psuedo profit sharing that the new arm of HarperCollins is testing: no advances, higher royalties.   E publishing, with its low overhead, provides a safety net for experimental fiction, the bailiwick of literary fiction.   E publishing can provide success for more authors with lower numbers of sales.   Those who have success in digital format are then pushed into the more expensive, but broader retail base of print publishing.

The benefit of digital publishing for literary fiction.

Publishing should not be defined in terms of medium.   Books are books, no matter whether they exist in ink or bytes.   And readers, serious readers, are readers no matter the genre.

→ Jane
Previous article: Which Book Has the Best Title?
Next Post: REVIEW: Just One of the Guys by Kristan Higgins