Why eBook Hardware Manufacturers Are Missing the Mark (and the Market) 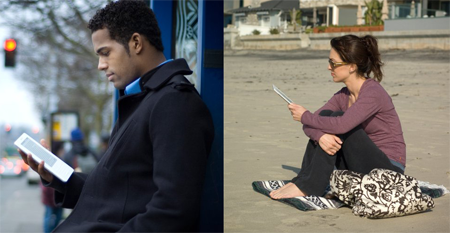 There’s something wrong with this picture.   Read the article to find out what.

Back in the nineties auto manufacturers began to realize that it was missing an important segment of the auto buying market: women. Today, women purchase over 50% of all cars (new and used) and influence 95% of all auto purchases.

Video gaming is also on the rise due, in part, to the increase of females playing video games. Women represent 38-40 percent of all gamers and average approximately 7.4 hours per week. (I have some thoughts about whether the increase of female gamers might be proportionate to the decline in reading).

One of the most popular console today is Nintendo Wii. It has been making money where other console manufacturers have not. 55% of new console sales were Nintendo Wiis. Wii Fit sold over 10 million units. In nearly every Wii commercial I’ve seen, a woman is in it. In almost every Wii Fit ad I’ve seen, it features a woman. Nintendo specifically targeted women with its Wii Fit marketing. EA Inc. hasn’t made a profit in 7 quarters and it’s pinning it’s hopes on a hit with women. To that end, EA Inc. has hired Oprah’s fitness coach and a marketing director for L’Oreal Paris.

After two years of research, Office Max has decided that women control the office supply buying decisions. Over $44.5 billion is spent by women in office supplies per year. I walked into Office Max last week and was immediately attracted to the new look of its products. The tagline for the new marketing campaign is “Life is beautiful. Work can be too.” The products are more fashionable but so also is the advertisements. The Sunday circular is more female friendly looking more like a fashion catalog than an auto-parts catalog which is the term the VP of marketing used to describe the old Office Max look.

I think you understand the point I’m getting at. The fact is that women initiate more than 75% of consumer electronic purchases yet one in three women believe that advertising for these products is not relevant to them:

Almost one in three women do not consider technology advertising relevant to them and the majority of women feel disillusioned that brand owners and retailers don’t understand what they care about and don’t view them as a relevant group of customers.

I can hear the chorus of amens from the readership here. Very little of ebook and ebook reading device advertising (outside of Harlequin) is targeted at women despite the fact the women make 70-80% of book purchases. I think many of us say that ebook manufacturers don’t really understand what women readers care about and it’s not just stylish products (although that’s certainly something that is important).

1. Recognize the female as a valid part of your intended market.
First ebook device manufacturers and ebook retailers need to recognize that women are a valid and important part of the market. We comprise at least 50% of the ebook buying market and could grow bigger than that with the right marketing. Therefore, at least 50% of any ad campaign and site design should consider the female and the female aesthetic. We like form and function, lads.

2. Never insult the target of the marketing.
Second, any ad should not imply that the gadget is sexier than the consumer but rather that the consumer is made sexier because of the gadget. The big mistake with Sony’s “Sexier Than a Librarian” ad campaign was that it insulted women and placed them lower in the food chain that a first generation electronic device. The message must be that the gadget enhances our life or even our innate sexuality.

In recent auto ads, women are featured in various day to day activities with their vehicles. The idea is to get women thinking that the vehicle fits into their lives, rather than the woman fitting her life around the vehicle. The most recent Kindle 2.0 ad shows a business man leaning up against the post reading a Kindle and a woman on the beach reading her Kindle, all alone. Seriously? What woman has frequent escapes to the beach where she is alone! The reason that 31% of Stanza readers read at night and 25% read during a commute is because that’s about the only time a woman is ever “alone.”

Ads need to show women reading on the bus, train, subway. Ads should show a woman leaning against a post waiting for a ride or in her SUV waiting to pick up the kids from practice or in the lunch line or grocery store line or waiting at the post office or in the doctor’s waiting room. The point of the ads should be that the device is there whereever a woman is, whenever a woman wants it. It should not point out that the only time you can read an ebook is when you are alone and in the park.

4. Playing up the environmental aspect

Even if eReading does not have a smaller carbon imprint, the fact that it seems like it does and manufacturers should play up on that. Being “green” is important to female purchasers these days. It makes us feel good to be “green” and in ebook reading, it’s an almost unconscious way to be green.

So DRM sucks and it prevents readers from sharing their books, but you can pretend that there is a sharing/community aspect by showing women sharing their readers with each other, perhaps at the baseball game. Show women interacting with each other on the eBook Reader as if somehow ebook reading can help you connect with your friends.

Another way to appeal to women is to create the idea that this device will promote reading. Why not show kids of all ages reading on the device or a mom and her kid looking at it together. Show a mom reading a Dr. Seuss book to her child, snuggled under a blanket. Again, it’s a way to show the woman how the device fits into every aspect of her life. She does not need to carve out special moments to read. Instead, the device makes it easier for her to enjoy herself at all times during the day, from the moment she gets up and reads the news of the day to her novel reading at lunch to her storytime with her kid to her right-before-bedtime moment to herself.

7. Sell it to the women.
eBook Reading manufacturers should be developing ad campaigns that appeal to women. (Disclaimer: I am terrible at catchy Tag Lines unlike Wendy, Super_Librarian). Ad campaigns for eBook Readers should be “Your pleasure. Your time.” or perhaps “For every moment you have to yourself and those you don’t.”