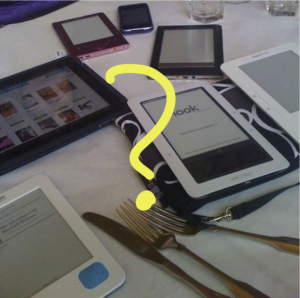 When I did my post last week, I was re-reading some of my past buying guides. Those focused on which ereader to purchase. I remember when I would anxiously await each new update to the ereader market and how excited I was about those new devices. Whee, this one has a keyboard. Oh my, this one has a touch screen that has no screen degradation. (The first touchscreen had an overlay that made the rendering of the letters cloudy).

Fortunately, Sony has developed a way to provide eink touchscreens without any screen degradation.      Sony achieved this by placing infrared optical touchscreen technology which, as I understand it, means that there are infrared lasers on the sides of the device that read your finger or stylus inputs.   Thus, there is absolutely nothing on top of the Pearl eInk display, just like on the Kindle.   If you look at Slide 2   from PCMagazine, you can see the clear difference between the former Sony PRS 600 and the Sony PRS 650.

Look at the light on the cover of the Kindle!

Lighting was so important that I wrote an article in 2006 wherein I argued that a backlight for ereaders was imperative. It was so important, I bought several different clip on lights and reviewed them.

Alas, booklights and I have never had a positive relationship. I can’t imagine having to use a clip on booklight for an ereading device. The ability to have the light integrated into the device is quite important to me.

I did order the Kindle Voyager. It’s supposed to be the best ereader ever made. Maybe it is. The light that floods the front of it seems more even than previous devices. The screen renders crisp letters but since I unboxed it, I haven’t read even once on it.

Digital books are my primary source of reading material although I have been known to crack open a print book from time to time.  I read on my phone and my iPad mini using the Kindle app. But I know that there are many who prefer their ereaders like my friend Melissa.

I’d love to know more about the DA readership. Let us know your reading preferences. I have two polls because I’m curious about what device you read on and if its a tablet, what app you use.