What do you get when you take one determined, if slightly bullheaded, woman, add a sawed-off, super-glued magic wand, a smelly disguise, a poisonous toad, a devilishly handsome border guard, a water sprite, and some very real magic? An unorthodox, and definitely, diverting trip to Faery in the company of Leticia Warton, a Godmother with a difference and a Sanction. And with her keeper, Marcus, who knows far too much about the dead witch and not nearly enough about love and happy-ever-afters. But he is certainly willing to learn. Very, very willing. 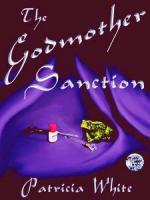 My usual practice is to give books up to a 1/3 of their length before tossing in the towel. It was the bits of humorous prose that kept me going with “The Godmother Sanction.” I’d be about to pull my hair out over the heroine then you’d zap me with something that would make me laugh out loud. Still, for me it took far too long before this book really started “going” anywhere. You loaded me down with “Faery 101,” introduced almost too many people for me to keep track of and described every last detail in excruciating detail but the story just seemed to churn around and go nowhere. It wasn’t until the Wish Quest began that I finally got my payback for sticking around and putting up with the heroine.

For the first 187 pages, I wanted Tish to die. I would have been happy to kill her myself or commission my own hit on her. In our interview with Heidi Betts, she talks about writing an unsympathetic character saying, “And I guess that's the trick if you're going to write about a character who is flawed and whom readers maybe won't sympathize with immediately–"give them a few snippets of likeability.” Honestly, I searched for snippets for Tish. And I found none. She’s the most bullheaded (your description of her), unlikeable, irritating, brat I’ve run across in a long time. Or maybe ever. She was determined that everything was about Tish, Tish, Tish and more than ready to fire herself up into yet another! rage over the littlest things. I understand she was frightened at times, questioning her sanity, felt she was put upon but really…the woman needs some serious anger management classes and she needs them now. Working herself into a screaming rage every three pages got old. Once the Wish Quest began, she improved rapidly but I don’t want to read another heroine like for a long time. Maybe forever.

Which leads me to Marcus. You make Tish act abominably towards him and describe him as stuck up, snotty,etc. I felt he put up with a lot of shit from her and I had trouble seeing why he starts to fall in love with her. At least beyond you telling me that’s what’s happening. Marcus feeling sorry for Tish because she doesn’t know where she is and the Godmothers are being highhanded towards her does not constitute love in my book. If this is what the border guards in this realm have to put up with, it’s a wonder anyone wants the job.

I did like the premise of the story. An alternate world where Godmothers are in charge, magic is common place and our standard fairy tales can sometimes be slightly twisted around from what we know. You described it well (if almost too well) and kept to your rules for it. I did have some problems with the editing and your sentence structure could become quite convoluted. I noted in your author bio at Fictionwise that you are a former English teacher so I’m at a loss to account for the sentence fragments and mismatched adverbs that made me stop and have to reread them 2-3 times to try and figure out what you’re saying. I’m going to assume it was the editing process that went awry.

Once the story got going, and Tish got filled in on Marcus’s past (and that got dragged out far too long as well), I enjoyed myself. For your humor alone, I’d be willing to try another of your books. But this one has enough problems for me that my grade is a C+.