REVIEW: The Diary of Mattie Spenser by Sandra Dallas 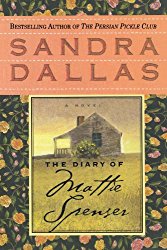 I remember reading about this book a few years ago when it was first published. For some reason, I never bought it then but I thought about it from time to time. When I saw it was available in ebook form, I took the plunge. So much of it reminded me of the song “Gold Rush Brides” by 10,000 Maniacs.

…There’s no way to divide the beauty of the sky from the wild western plains.
Where a man could drift, in legendary myth, by roaming over spaces.
The land was free and the price was right.
Dakota on the wall is a white-robed woman, broad yet maidenly.
Such power in her hand as she hails the wagon man’s family.
I see Indians that crawl through this mural that recalls our history.
Who were the homestead wives?
Who were the gold rush brides?
Does anybody know?
Do their works survive their yellow fever lives in the pages they wrote?
The land was free, yet it cost their lives.
In miner’s lust for gold, a family’s house was bought and sold, piece by piece.
A widow staked her claim on a dollar and his name, so painfully.
In letters mailed back home her Eastern sisters they would moan as they would read accounts of madness, childbirth, loneliness and grief.

You certainly give Mattie Spenser enough to endure. And if it doesn’t happen to her, then it occurs to one of her few female neighbors, stuck out on the prairie of 1860s Colorado Territory. I certainly hope that you didn’t read some account in which the death, disease, capture by Indians, infant mortality, dried up crops, tornados, blizzards, rattlesnakes, madness, marital disputes and family horrors detailed here took place in one family.

No one is more surprised than Mattie when handsome Luke Spenser proposes to her then whisks her off across the prairie to his Colorado homestead. He tells her he’s looking for a strong, sturdy wife who can survive the harshness of the life there and Mattie doesn’t disappoint him. She is everything that a good 19th century wife was supposed to be. Helpful, hardworking, industrious, willing to bite her tongue and allow Luke to be the undisputed head of the family. She adores him even if sometime she wants to hit him and as they start their life together, she confides her hopes and dreams of their future to him and to the diary she began right after he proposed to her. But Luke is more reticent in his feelings and often Mattie wonders if he loves her as much as she loves him. Late in the book, Mattie gets her answer.

Mattie has such a witty sense of humor and you do such a good job painting a realistic picture of life on a Colorado homestead, that half the book had flown by before I even realized it. Even if people didn’t talk or act this way in real life, it’s all just as I imagined it really would be based on historical books and accounts I’ve read. I felt transported to another time and place. One which I doubt I would have had the strength to endure.

I had a pretty good idea just what was going on in Luke Spenser’s mind yet the final revelation of it to Mattie was shattering. At this point, I truly wondered what was going to happen next. Could Mattie deal with what she learned? As she decided herself, I can see based on the beliefs of the day, why she makes the final decision that she does. And while the final letter does provide “closure” to the story, somehow I feel that it diminishes what Mattie endured and suffered for Luke to suddenly change his views and them seem to settle into a happy old married couple. After what he did and planned to do, I doubt that if I were his wife and the mother of his child, I could ever forgive him as much as the letter seemed to imply Mattie had done.

The writing style was fluent, the characterization was top notch and as I said, I sucked the story down and couldn’t wait to to pick it back up when things forced me to put it down. Yet that resolution of the story as well as the seemingly endless supply of disasters in the book lowers my grade to a B.