The Curious Case of Ellora’s Cave

Long before there was the Kindle, long before self publishing, long before the emergence of Fifty Shades, a digital first publisher by the name of Ellora’s Cave began to deliver sexy reads that would transform the face of romance publishing. Ellora’s Cave was established in 2000 as an outlet for Tina Engler to publish books with heavy sexy content that were romantic in nature. Because there was no “ebook” in the late 1990s, Engler would create PDFs and email them to reader who sent her money via paypal. In 2000, EC was established and soon thereafter, it would become a powerhouse selling hundreds of thousands of ebooks a year in a world where ebooks did not exist for the most part.

Engler’s path was not dissimilar to that of JK Rowling. She went from welfare to millionaire in a short time.

As Ellora’s Cave began to flourish, arguments began to spring up about its legitimacy. There was row after online row about whether digital publishing was a legitimate career path. The Romance Writer’s of America (RWA) denounced it and refused to acknowledge digitally published authors in its Published Author Network or for its awards. In fact, it wasn’t until 2012 when a digital first book won the organization’s RITA award. (Fiona Lowe’s Boomerang Bride from Carina Press).

The truth was, though, Ellora’s Cave was thriving in the mid 2000s and through its digital publishing portal, many women were empowered not just through the stories themselves, but through the act of making money. Some may scoff at the source of the money, but all green spends the same. There were several authors making six figures a year and there were even more making a living wage–for the first time in their lives.

As the world began to catch on to digital books and the Kindle was launched creating a second wave ebook revolution, Ellora’s Cave seemed poised to launch itself into publishing super stardom. It had thousands of backlist titles and it had launched many of the bestselling authors today–Bella Andre, Lora Leigh, Christine Warren, Beth Kery, Lauren Dane, Jaci Burton, to name a few.

Yet something strange happened. Growth stagnated. In 2010, it was revealed that EC’s revenues were $5 million but a reported $6.7 million in 2006. How on earth was a digital publisher’s income declining in the biggest boom period of digital books? (This was before self publishing took off).

Word of Ms. Engler’s increasingly erratic behavior surfaced on odd places on the internet and then came the lawsuits. In 2008, former employee Christina Brashears filed suit for unpaid monies against EC. EC countersued. Brashears, Publisher and Chief Operating Officer, left and formed Samhain. Bad blood existed which culminated with EC agreeing to a settlement of undisclosed amount. The damages were alleged to be in the high six figures to low seven figures. EC’s behavior during this lawsuit was so egregious, the judge commented on it in his ruling ordering damages to be paid to Brashears. In 2009, EC filed suit against Borders accusing them of illegal business practices. The suit went nowhere.

In the Brashears lawsuit, EC was accused of inappropriately diverting funds to Tina Engler through overpayment of rent. In 2009, the prevailing market rent for the space EC was occupying in Akron Ohio was around $40K but EC was paying Engler close to $100K per month. EC was providing loans to various officers at no interest and there was no indication those loans were ever repaid.

At the same time, court records showed repeated tax violations by Engler and Jasmine Jade Enterprises. Since 2009, Engler has had a tax lien filed against her by Ohio Department of Taxation in every year except 2010.

In March of 2014, Engler was hit with another tax bill, this time from the City of Akron in the amount $29,679.52. Court documents reveal she is paying $2,473.70 per month. In the meantime, Engler boasts of her Rodeo Drive shopping trips and her new property purchase in West Hollywood on her Facebook page. She claims that she is having the head of her security detail investigate “everyone” and turn over information to “Interpol.” 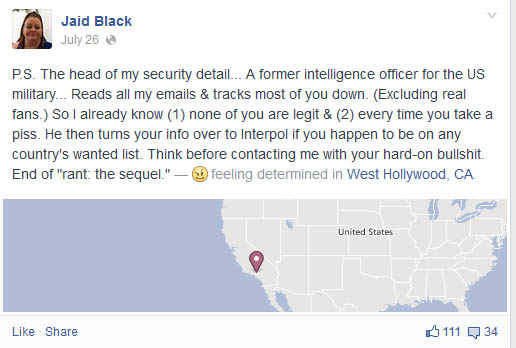 What likely saved EC prior to this year was the acquisition of 75 books from author Laurann Dohner. You may not have heard of her recently, but Dohner is a huge seller for EC. She began hitting the combined lists in 2012 and continued to hit them thereafter.With her tremendous backlist and the high prices, there’s no question that Dohner was keeping EC afloat along with Lolita Lopez, Mari Carr, surprise hit Jo Wylde, and a handful of others.

In 2014, this appears to not be the case. In an email to the EC authors and confirmed by the CEO Patty Marks, the sales for EC books have plummeted.

Many authors and other workers associated with the production of EC books are afraid to speak out. They email me and DM me from made up accounts and beg for secrecy. They speak of a vindictive company who will be unafraid to retaliate and many of them who are owed several thousands of dollars fear that the money may never be paid to them should any outward showing of non allegiance be discovered.

But the problems within Ellora’s Cave are deep and broad and should be brought into the light of day, not only for those existing authors and creators but for future ones. In internal emails, the CEO admits that “the drastic drop in sales has resulted in large net short term variable production losses and slow and often negative return on investment for EC on almost every new book we publish, with the exception of a handful of the highest sellers.”

Despite authors, editors, and cover artists going unpaid, Engler is in the process of launching at least one, if not three, different businesses. She has a new epublishing serial available that she is writing, she has a production company which she advertises as producing an untitled horror film and is attempting to shop a reality TV show around her publishing company and the Ellora’s Cavemen, and she has a self publishing services company called Beton Black Press.

A report from Ohio business record places Ellora’s Cave revenues at $15 million last year. So why is it that tax liens go unpaid as well as the salaries or royalties of creative individuals? It is unknown but it sounds like the money is being mismanaged at best and improperly diverted at worst.

What’s the result? Many people believe that EC will close its doors before the summer is over but at least by the end of the year. If it enters bankruptcy, author’s intellectual property rights are part of the estate and can be sold off to the highest bidder.  It could wind down and revert the rights back but it’s doubtful that will happen.

For authors, a lawsuit could be brought but oftentimes those are expensive. If EC has not paid royalties, then its materially breached the contract. Problematically for authors, courts often look for the breach to be “cured” or in other words, if EC can pay the owed royalties, the contract is not voided (legal term).  A claim for diversion of funds (a piercing the corporate veil argument) can usually only be brought by shareholders or directors in a company. Neither are a position that the author holds. And in every case, the author is only due her royalties. If she should sue and the author not be paid, then the contract could possibly be cancelled.

No author wants to see EC go bankrupt but they also want to be paid. As do the editors and cover artists. It rankles to see Ms. Engler post on her Facebook page of high end shopping sprees while individuals who make money for her company go without.

There’s a sad irony to the fact that a publisher that gave many women a living by writing about women exercising sexual agency now looks to be placing these women authors in a very vulnerable position, one that sets a really poor example for digital publishing in yet another new era of Romance writing.

Note: if you do plan on commenting anonymously, please use an alternate email. we use gravatars here at Dear Author which are associated with your email address.