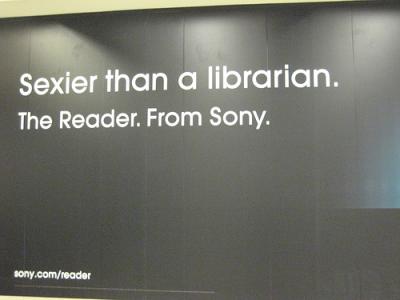 Sony has a new ad campaign presumably to stir excitement about the next generation of Sony Readers likely to debut this fall. It’s slogan is “Sexier than a Librarian.” Now having seen SuperLibrarian, Wendy, in her slinky black halter dress this summer, I can certainly say that no electronic device is sexier than she. Maybe Sony shouldn’t insult those individuals who are encouraging reading because isn’t that what Sony wants? More readers? and less pissed off Librarians?

Since it seems like the week of Re-Rewrites, let’s help Sony think of a better slogan. My selections:

Your turn, ladies and librarians.

→ Jane
Previous article: USA Today Besteller List, Week Ending September 9, 2007
Next Post: Author of Fabricated Memoir, James Frey, Signs with HarperCollins for His Next Memoir. No details as to wether it’s made up.