Should I Buy an Ebook Reader This Year?

The nook, an electronic reader from Barnes and Noble, was announced on Tuesday. It is not likely another ebook reader will be released before the end of the year. Therefore it is safe to start contemplating whether it is worth buying an ebook reader this year. Author and reader Kay Sisk sent me this awesome comparison chart of current ebook readers.

There are three basic choices for the dedicated reading market:

Pros of the Kindle: There are two flavors of the Kindle:

The Kindle allows for continuous access to your ebook purchase and the Amazon digital bookstore via 3G network from AT&T.   You are allowed to hook up to 6 devices to your account.   I have my iPhone and my husband’s iPhone devices registered to my account. If you are particularly trusting, you can share an account with up to   5 other readers. Anyone with a device registered to the account, however, may charge to that account.

Kindle’s refresh rate is fast (how fast the pages “turn” electronically)   and your annotations, notes, and last place read will be synched across the registered reading devices.   I.e., if you had an iPhone and a Kindle, the notes that you took on each would be synced, as well as the last place that you read the same book.

Amazon will be releasing a desktop application for both the PC and the Mac allowing synching with those devices as well.

Cons of the Kindle:

The only place you can buy secure ebooks for the Kindle is through the Amazon digital bookstore.   (Books that are DRM free like His Lordship’s Mistress by Joan Wolf can be purchased at Fictionwise in Mobipocket format and then emailed to the Kindle).

The Amazon is a closed device and only the Kindle and thus the Kindle App can view the Kindle book.   The keyboard on the Kindle is difficult to use and not conducive to long note taking.   There is no file organization on the Kindle so if you have a huge ebook collection, there is no easy way to navigate through it.

No library connection.   Covers are extra.   There is no ability to expand the Kindle memory. 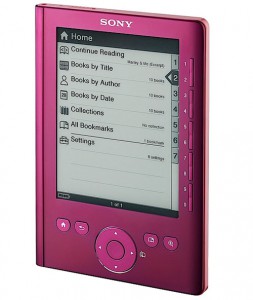 There are three versions of the Sony:

Pros of the Sony

The Sony devices accept epub which is fast becoming the standard in the industry.   Because of this, the reader can engage in Internet price comparison, shopping for the book at the cheapest prices.   The epub The touchscreen is responsive and it is easy to take notes using the stylus by writing on the screen itself.   Sony boasts a great organization system for the devices allowing books to be sorted into “collections” (like folders).

The Sony Touch and Daily Edition come with faux leather covers along with SD and Memory Card slots for expansion.

One of the best features of the Sony devices is the ability to interface with libraries.   Most libraries that lend digital books use Adobe DRM encryption (epub and pdf).   Sony reads those formats and therefore the Sony allows you to take your library reads with you.   The Daily Edition allows you to access libraries directly from the device itself.

Cons of the Sony.

Only the expensive Daily Edition allows for over the air purchases. The Sony ebookstore, however, often has higher ebook prices than other ebook retailers.    Sony does not ship with a wall charger. Instead you either charge via USB or buy a wall charger separately.   There is no synching between annotations you take on the computer or other device and your Sony. 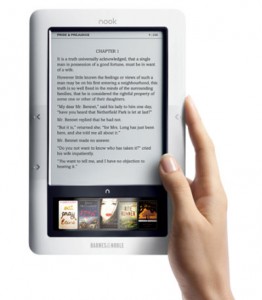 Pros of the nook

The nook has 3G and in store wireless capabilities built on an Android platform.   Android signaled to me that the hackers will be all over this. The wireless capability is likely to be the first things hacked.   As commenter Dana noted, wireless capabilities are not crippled.   Moving on, The 3.5″ LCD screen allows fast browsing and note taking.   Like the Kindle, the nook allows for synchronization of notes across platforms.   The notetaking on the LCD screen will be light years faster than it is on the Kindle.

The nook will be able to read encrypted epub as well as eReader.   (Can read more about the Adobe/eReader integration here).   Supposedly this should mean that you would be able to use these devices with digital library books.

BN has a much heralded Lend Me feature but it only allows you to lend a book once AND it will not be enabled for all books.   Publishers don’t like the feature (and neither do authors).   PublishersMarketplace has this to report (paywall):

But the company’s web site clearly states that a given ebook can only be lent “one time.” One publisher told us that BN was initially trying to secure broader lending rights but pulled back based on broad publisher resistance.

For many big publishers, that’s still one time too many. [William] Lynch would not specify a number of lendable titles, only saying it would “a good bit,” noting that available titles will carry a LendMe burst symbol. But executives at most of the biggest trade houses indicated to us that they have not agreed to participate in LendMe.

Cons of the nook

There is no file organization on the nook.   You can browse by title and author.   You cannot create your own collections.   As with the Kindle, this provides problems for readers with large digital libraries.   The nook does not read RTF or Word docs.

Because of the LCD, the battery for the nook does not last as long as the Kindle.

Of the current slate of devices, the nook at $259 seems to be the best device for the money.   It has a more open platform than the Kindle but still has the over the air purchasing capability.   Having said that, if you could wait, I wouldn’t buy a new device this Christmas.

New multi function devices are due to hit the market in 2010 including the likely Apple Tablet.      It is easy for me to play the waiting game. I have an ebook reader; three of them, in fact: the laptop, the iPhone, and the Sony 700.   Having said that, I just know from years of reading on dedicated and multi function devices that I gravitate toward using the multifunction devices.   These new tablet devices will allow you to browse the web, play music, watch video and read.   If you can, wait.

→ Jane
Previous article: REVIEW: An Unexpected Suitor by Anna Schmidt
Next Post: If You Like Romances Featuring Mistress