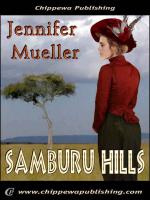 I don’t think any of your stories has been less than a B grade for me and “Samburu Hills” continues that tradition. The unusual settings and eras you choose for your books are heavenly for me. My blogging partner Janine once said if there were a romance set in Timbuktu, I’d be the one to read it and I think you’d probably be the author to write it.

When Celeste Reed steps off the boat in the fledgling colony of Kenya, East Africa she finds out the man that she was to marry doesn’t even care to get to know her let alone listen to a word she says. Life is miserable and then he has the nerve to die leaving her to run an estate without any money. It seems he spent all he had to impress the colony and she was just part of the package. Africa is unforgiving to the weak, but it can be the people that you least expect that make it.

And then there’s Edward.

Recently I watched the PBS miniseries “Heat of the Sun” set in 1930s Kenya and it jogged my memory that this book had been released. Your time frame is a little earlier than that but I imagine the type of characters hanging around in Nairobi were about the same: decadent, up to no good, and thoroughly snobbish. As if Celeste wasn’t up against enough trying to get her Kenyan ranch to break even against all odds, she has to deal with this lot whenever she ventures into the nearest town, two travel days away, to sell the crops, cattle and whatnot. I love Celeste, she’s so practical and down to earth. She’s a straight talker and straight shooter (love the scene when she tells her no-good husband off with the help of a shotgun), a hard worker and someone who finally gets a chance at a HEA after so many years of loneliness. The secondary characters were colorful and well used. I do have a question though. How could Celeste’s husband, the ninth child of a Marquess, be a Lord in his own right?

This book might look short but so much is told so economically. You can tell more with less words than most authors I’ve read, as if you’re paring a story down to its lovely, compact bones. The vivid descriptions of Kenya and her people put me right there. B+ for “Samburu Hills.”