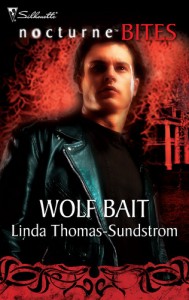 I read your offering for last month’s offering of Nocturne Bites.   Although I was disappointed by what I felt was an unresolved plot thread, I later discovered that it had been intended to be the first of a series, in which the various installments were connected by the mystery of an unidentified werewolf attacking and subsequently infecting innocent humans with his bite.   While this doesn’t give you a pass when it comes the abrupt ending of the plotline in question, it did clarify some things for me.   I’m not going to debate the pros and cons of writing a paranormal continuity that switches back and forth from novellas to novels (although I hear there are plans for novels in the future, this installment is once again a novella), I did want to mention this fact for other readers who might be interested in your stories since I know there are some who dislike this particular trend.

Jenna James is a psychiatrist with a problem.   Her latest female patient is exhibiting strange behavior and symptoms, and she has no explanation for it.   So she calls Detective Matt Wilson to come have a look and give her some insight.   The complication?   She and Matt are lovers — or were until he abruptly cut off all contact with her three months ago.

Matt knows exactly what’s wrong with the patient.   She’s a werewolf going through her first transformation.   He knows the signs.   After all, he’s a werewolf himself and has been for the past three months.   Now his problem is to find a way to help the patient while dealing with Jenna, who wants to know why he left her without a word.

While the first novella in this series had some flaws, I thought it showed promise so I approached this installment with the expectation that we’d see more advancement in the plotline regarding the mystery werewolf who’s taken it upon himself to randomly infect humans.   I was sorely disappointed.   There was nothing of the sort here.   I wasn’t expecting major revelations or anything, but a hint or two would have been nice.

More importantly, however, I thought the main plot was contrived.   If I had been reading this in print form and not on my Sony Reader, I absolutely would have thrown this against the wall the minute I read the ending.   It’s difficult to talk about without spoiling every detail, but I thought what Jenna did was absolutely cruel and inhumane towards the patient.   Her desire to see Matt again did not outweigh the unnecessary pain and anguish she inflicted upon that poor woman just to sort out her relationship troubles.

Secondly, Jenna’s big reveal made me feel cheated because it was inconsistent with what information we’d been given throughout the story previously.   If what we learned in the final pages had been true all along, why in the world was there that scene where she googled the classic symptoms of a werewolf?   Never mind the fact that I have a very hard time believing anyone wouldn’t associate transformations, hair growth, howling, and full moons with werewolf lore.   It’s like that one episode of Supernatural where the Winchester brothers pondered why people in horror movies never know basic supernatural lore. Answer: Because they’re in a horror movie and if they already did know, there’d be no suspense or plot.   So in that sense alone, the scene failed for me.   But in combination with the ending, my reaction can only be summed up with WTF just happened here?

Now don’t get me wrong.   Misdirection can be a powerful narrative technique.   For example, this can be done extremely well in first person point-of-view, in which you can have an unreliable narrator.   Dracula, after all, is a classic example of unreliable narrators left and right.   But this story was written in third person of view, and we do see from Jenna’s perspective and get insight into her thoughts.   There was absolutely no reason for things like the aforementioned computer search scene and some of her reactions if the ending’s big reveal was true from the very beginning.

I was actually going to give this novella a D but explaining how the ending made every single thing that happened before it a lie, as well as made the heroine completely unlikeable in my eyes, ticked me off all over again, so I’m afraid it’s an F.   And to think all I wanted was just a little more advancement in the mystery werewolf plotline.

This book can be purchased in ebook format from the Sony Store and other etailers. (digital format only)

→ Jia
Previous article: First Page: Unnamed Contemporary Romance
Next Post: How to Decide Between the Sony and the Kindle eInk Readers