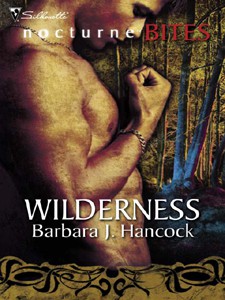 If I recall correctly from the email Harlequin/Silhouette sent Dear Author, you’re a new author they discovered via email submission.   I always look forward to reading new authors in the hope of finding someone I’ll love.   And at these short fiction lengths, it’s a minimal time commitment, which means less risk for me.   (For the readers out there, I call Nocturne eBites novellas but they’re actually novelettes by SFWA standards.)

When a pandemic swept across the world, supernaturals (werewolves, psychics, etc.) were inadvertantly outed.   Because their immune systems were stronger than the average human, their continued health drew suspicion, which led to the government later capturing them for study and experimentation.   Ever since, supernaturals have fled into hiding and organizations like Humans Against the Exploitation of Supernaturals (HAES) have come into being.

Tess Haverty suffers from survivor’s guilt.   Her twin sister, Lily, was a powerful psychic who was kidnapped by the government.   Although Lily was freed, the experience proved too much for her and she committed suicide.   Because their parents died when they were teenagers, Tess is lost without the presence of her stronger, vivacious sister.   The only reason Tess escaped government notice is because she fell deathly ill when the pandemic struck, eliminating her as a supernatural.   Unlike Lily, Tess’s psychic gifts are erratic at best and extremely unreliable at worst.

After Lily died, Tess joined HAES and her first job is freeing Colin Masterson, an Alpha werewolf who’s being taken to the same lab that studied Lily.   She successfully does so but soon after, the government discovers their HAES cell and dismantles it.   Before they can capture Tess, however, Colin takes her away to his pack that hides deep in the forests of southwestern Virginia.   There she learns the pack is looking for one of their own who’s also been captured by the government and the only way to find him is by using Tess’s undependable psychic talent.

I really liked the activist angle to this story and the original way supernaturals were outed to the world.   No dramatic announcements or brutal murders here.   It was just a simple disease that changed everything.   I liked that bit a lot because it’s very true to life — how the rise of a new disease can change an entire society’s perspective, sometimes for better, sometimes for worse.   Tess’s emotional arc was also strong, watching how she moves past Lily’s suicide and looks towards the future.   It was wonderful watching her accept her gift.   She might never be as strong as Lily but it’s still a tool to use and dismissing it for its lack of strength is foolish.   It still lends an advantage.

I also enjoyed the interactions in Colin’s pack.   They’re very much a family, albeit one that’s shrinking due to the government’s current policies.   These aren’t violent, dangerous creatures.   They just want to live happily and be left in peace.   I can sympathize with that desire.   And Tess and Colin’s HEA was one I could buy — Colin helps her find the confidence to move on while Tess helps with his loneliness.   These are two people who complete each other and even with things like psychics and werewolves and government conspiracies, that’s what romance is all about.   B-

This book is an e only publication by Harlequin. It can be purchased at Harlequin or any other e-retailer that sells Harlequin books.