REVIEW: Where the Heart Is by Ally Blue 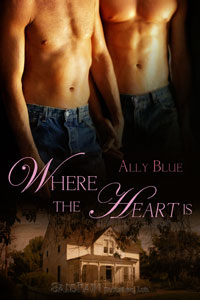 When I began looking into various prolific m/m authors, your name seemed to be very prominent. When Samhain offered us a chance to review this novel, and I noticed it’s set in North Carolina, it seemed fate. Kismet. Meant to be. After I finished it, I’m not so sure.

Falling in love is easy. Holding on to it can tear your life apart.

When Dean Delapore takes a break from Bay City Paranormal Investigations, he doesn’t expect his work to follow him to the eclectic town of Carrboro, North Carolina. The chance to investigate a haunting at the Blue Skye Inn and Winery is more than he can resist, mainly because of the inn’s owner. Deceptively shy and gorgeous, Sommer Skye is not only fantastic company, he’s the best lay Dean’s had in ages.

As Dean probes the misty secrets of the haunted inn, he unexpectedly peels away the layers hiding Sommer’s private pain. Pain Sommer’s not sure he can withstand. By the time Dean realizes just how deep his feelings for the innkeeper run, it’s far too late to turn back.

Now if only he can convince Sommer that falling in love changes everything, maybe for the better. If the bones of the past can be laid to rest-

“Where the Heart Is” is part of a series but I never felt I was missing anything for not having read the previous entries. There are a few references to an obviously previously featured couple but their appearance is for this story and serves to show readers of the past books how well they are doing.

I can’t help but see these characters in manga form. The long hair of so many of the characters, complete with descriptions of the varying colors. The popular places they shop in and frequent. This is a very visual book.

Dean and his college friends obviously share a long history. As such, I expect them to have “in-jokes,” short hand references and be able to convey thoughts and feelings with glances and looks. I would also think they would know at least a little about each other’s sexual history and preferences given that two of them are married to each other.

However, while reading the book the main impression I got was of latte slurping yuppies who snort-laugh, snicker and smirk a lot. I would guess this is supposed to convey how “in tune” and comfortable they are with each other but my notes stated this: “These people are starting to seriously annoy me.” Not, perhaps, what you were aiming for. Kerry yo-yo’s from urging Dean to go for Sommer to being furious when Dean doesn’t ‘call home’ and back again. Pregnancy hormones kicking in much?

Dean is a paranormal investigator? Oh, dear. How much demand is there for this? Just curious. I’m not sure about the whole paranormal aspect of the plot. At first Dean – and his coworkers in Mobile – are excited about an actual manifestation. But later on, Dean seems to shrug off the whole thing despite it being – at least from my POV – something that he should be jumping up and down about. His company should be turning cartwheels as here seems to be actual proof of ghosts and hauntings. But oh no, he’s too emo to be bothered right now. He’ll deal with it later, maybe. And how often do men feel “hollow and strangely tarnished” by the knowledge that their coworkers and friends know they get laid by at least one or two new people a month?

At first I thought Sommer and Dean were going to flounce at each other to see who was forced to be the top in their sexual relationship but my, didn’t Sommer take command in the bedroom? Dean was looking for a man to f*ck him through the mattress and he certainly found one. And the occasional feeling they have that the apparition is following and watching them certainly doesn’t inhibit their fun.

Wild sex toys – okay. Certain sexual practices – well, I hate to seem like a prude but there are certain things people will do to get their rocks off that I just don’t find exciting nor do I want to hear or read about them. Enemas are one such thing.

I don’t mind hawt, sweaty, man-goo sex but please for the love of G-d, have them take showers afterwards! A simple quick wipe with a wet washcloth before starting their day just will not cut it.

At one point, Dean tells Kerry that he dates a lot but later he says his dating skills are rusty. Which is it?

If Dean likes something, it’s “adorable.” He also wants to cuddle Sommer like a kitten. o-0

The final resolution of Sommer’s family mystery was flat. And it wasn’t really a resolution for me. I agree with Dean. What family member will do that and then not tell someone, especially their own son? And then what happened? Hippy or no, the person has to be somewhere.

I did like that Dean doesn’t equate lust and shared experiences as love. He’s wary of falling in love and doesn’t go off in girlish glee at the thought that he’s found his twue lurve. He’s aware that it takes time to truly know someone even if you do have an intimate acquaintance with that person’s favorite sex toys. But I did wonder if he remembered to remove the cock plug before going through security for his flight back to Mobile.

The sex is hawt and these two do seem to have a lot of sexual chemistry. I’ve given up trying to decide if this is at all a realistic portrayal of homosexual sexual practices or just a wishful fantasy for the mainly female audience the book probably commands.

I graduated from UNC. I’ve driven through Carrboro many a time. I know it’s spiffing itself up but the images of it as the left armpit of North Carolina still linger in my mind. I guess it’s time for a drive through the next time I’m near there to check out all these neat sounding places. C