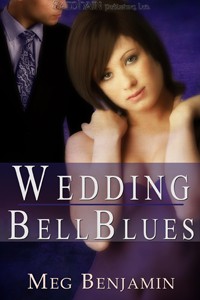 I’ve been in several weddings myself, including one that was almost to the “can one more thing go wrong” stage before we finally pulled it off. So I enjoy reading about bad bridesmaid dresses, snooty in-laws and other near misses and disasters on the way to the alter.

Sometimes I feel like writing my own review blurbs and at others I decide, screw it – I’m just gonna steal the one that’s already written. Today’s a “screw it” day [evil grin] so here’s the Samhain blurb.

Janie Dupree will do anything to make sure her best friend has the wedding of her dreams, even if it means relinquishing what every bridesmaid covets and never gets-‘the perfect maid-of-honor dress. Problem is, family drama as tangled as a clump of Texas prickly pear cactus threatens to send the skittish bride hopping aboard the elopement express.

Janie could use a hand, but the best man’s "help" is only making things worse.

Pete Toleffson just wants to get through his brother’s wedding and get back to his county attorney job in Des Moines. He never expected to be the engineer on a wedding train that’s derailing straight toward hell. Janie’s the kind of girl he’d like to get close to-‘but her self-induced role as "Miss Fix-It" is as infuriating as it is adorable.

If they can just fend off meddling parents, vindictive in-laws, spiteful ex-boyfriends, and a greyhound named Olive long enough to achieve matrimonial lift-off, maybe they can admit they’re head-over-heels in love.

This one starts out with a hella info dump on all the many and various people from, I assume, book one of the series. But…once that was done, I got people sorted in my mind and did okay.

It’s not the laugh a minute riot I kind of expected from the blurb. But there’s still plenty of humor to go around. Yet it’s leavened with some serious issues as well.

Wow, you give us two villains for the price of one. Janie’s boyfriend Otto is basically a jerk from the first page we seem him. His testosterone “pissing” contest at the pool party about says it all. After that, he was all downhill. Pete’s sister-in-law Sherice begins a bitch and ends a bitch. Lars seems like such a nice guy. A standup guy. So how, short of thinking only with his little head where she’s concerned, could he have hooked up with this beyotch for long enough to have a year old daughter? Let’s hope there’s better in store for him.

The three mothers in the book all have their moments. Reba eventually straightens up and comes off the best of them. At least she’s willing to finally listen when Docia and the girls put the foot down about how out of control “The Wedding” was getting…and how far from Docia’s dream day. Janie’s mother tries to do the Nice Southern Lady thing whereby any chance to be married is not to be sneezed at. I had hoped this attitude was pretty much a thing of the past but perhaps not. Mrs. Toleffson – well, she can suck the life out of a party with one snotty comment, can’t she? She does eventually shape up but only after the error of her ways gets shoved in her face in a way she can’t continue to ignore. She does have some issues in her past that help explain her attitudes but best of luck to Docia dealing with a lifetime of her as a mother-in-law.

Pete and Janie are both fixers and helpers as becomes obvious as the story progresses. And just when I was expecting them to go all Noble on each other and do the “no, no, what’s best for you” routine, Pete’s father gives him some good advice which Pete takes and runs with. This scene makes up for bookcase full of martyr scenes I’ve been forced to endure over the years. I had a real smile on my face throughout the whole thing.

Unlike the movie “27 Dresses,” I’ve never been stuck with a truly hideous one. But Janie’s dress sounds divine. The “National Male Uniform” that the men decide on in place of the tuxes was inspired. One of my cousins did something like that at his wedding and everyone loved it.

I adore the fact that the brothers can laugh off the touch football game and Otto being an ass. They know what’s important in life and what’s not. Or rather, most of them do but Lars still has some lessons to learn.

Pete’s initial thoughts when he hits town seem so guy. Wedding cake toppers? Duties as a best man? He’s a guy, he doesn’t know this stuff and couldn’t care less. He’s there to get Cal to the alter on time. But then as he gets more involved in the whole train wreck wedding, he bucks up, learns what’s needed and sees that things get done, then helps Janie salvage the Texas wedding. He might not know about bridesmaids dresses or care about the floral arrangement but he cares that his brother and his soon-to-be sister-in-law have the day of their dreams.

Coonass? What’s a coonass? Must look this up.

Olive must be one of the smaller racing greyhounds. I had a friend who got a rescue greyhound and believe me, it would have taken the Hulk to carry him – in his dog crate – around. Oh, and I love her name. Just love it.

I also love the friends-ness and camaraderie of Docie and the girls. These are friends for a lifetime. Friends who will see you through thick or thin, get drunk with you and see that there’s someone to bail everyone out of jail when it’s all over. And yeah! for Janie telling Sherice off for dissing their friends. That’s a line that should not be crossed, especially the way Sherice crossed it.

I like that Janie is realistic about Otto and tries to deal with him patiently and politely. It is part of her fixer/helper personality but it also shows class. But even she has her limits and longs to let her inner bitch out to play once in a while! And Pete feels the urge to talk with Janie about a difficult case, to in essence, tell her how his day was. That’s a nice sign of how serious he’s getting about her. It isn’t just lust and hot bodies here, there’s sharing and caring as well. I like this a lot.

When I read the blurb for the book, I imagined a cutesy, fluff book. You gave me more. I got a book filled with characters who were more than standard stereotypes. Instead of making Pete and Janie all wholesome goodness, you made them well rounded. I wasn’t always happy with them – namely Pete and his reactions to his mother – but this added to the realism. And I ended up liking this book much more than I have had it been just another piece of cotton candy. B

This book can be purchased at Samhain and other etailers.