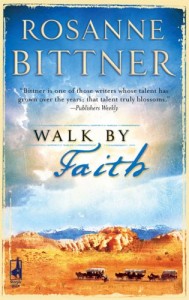 Until I saw this book listed at the eharlequin site, I had no idea you’d written any Steeple Hill Love Inspired historicals. Since “Texas Embrace” is one of my favorite old timey Westerns, I decided to give “Walk by Faith” a try.

This story is not for readers who don’t want to really, and I mean in depth, learn about the hero’s conversion to God. Dawson did have a legitimate reason for aversion to religion, what with having the hell beaten out of him by gawdawful “minister” who raised him after his parents died. But we are told, and retold, and retold again, how guilty he felt for what he innocently did as a child, how he felt the weight of the world resting on his shoulders and how he *never* thought he’d be worthy of anyone decent. By the end of the book, I wanted to say, “Dawson, give it a rest.”

I noticed that his first wife, now dead, hadn’t been someone he truly loved, merely a woman to warm his bed so I guess it’s okay that she died. At least that was the feeling I got. I’m not sure about whether or not it was an issue in the 1850s that she was Mexican and by marrying Dawson could enter the US legally. Did this matter then? I don’t think so.

I think the background you give the heroine probably isn’t too far from what could have happened then. Women were often married for their property and once a husband had got his hot little hands on it, there wasn’t too much she could legally do. Chad is such a loser. But I wonder what could have been his grounds for a divorce? And I was flabbergasted that Clarissa would have come out of the divorce as being in the wrong and that his new wife wouldn’t have been shunned as well for 1) allowing herself to get knocked up and then 2) running off with a married man. I think her decision to pull up stakes and head West is probably the best she could do under the circumstances.

Once Clarissa decides to marry Dawson, she insists that he provide her with a written note allowing an annulment. Would this be possible? Especially since they had – for all anyone traveling on the wagon train knew – actually consummated the marriage. I mean, they would head off together and even though Dawson slept outside the tent – and wasn’t he amazingly self-controlled to manage to restrain himself from claiming his “husbandly rights” – they tried to keep the fact that the marriage wasn’t consummated from everyone but Michael and Carolyn. And if they had reach Montana and Clarissa decided the marriage was a no-go, wouldn’t she then face the same shunning from her new community that she had from the old? Just saying…

Sophie is a sweet child but is the main reason why I decided a long time ago to remain childless by choice. It’s a good thing for her that Dawson doesn’t believe in corporal punishment because, Lord, sometimes that girl needed a swipe on her behind despite the fact that everyone thinks she’s just precious. Oh and she lisps. I really hate that in books.

I like Michael and Carolyn and the cholera scene did make me sad. But, since this as well as the other issues you include for the wagon train were well known along the immigrant trails, I could deal with them. Also, the inclusion of downright dislikable people in the group is a good thing for me. I mean, what are the chances of happy harmony in a group living through that rough a time? But, I thought that everyone traveling via wagon train usually packed the actual wagon with all the stuff they needed for their new life instead of spreading out feather beds and sleeping inside them. Just saying….

Yes, Clarissa is an intelligent, hardworking woman who has had a rough hand dealt to her thus far in life, but Dawson sure does lay it on thickly whenever he defends her. She is the Bestest, Hardworkingest, Prettiest, Smartest, Most Wonderfulest woman on that darn wagon train and he is going to make sure everyone knows it.

Dawson veers towards too PC in his views on buffalo and Indians but thankfully saves himself right at the end. He has a military background so it makes sense that he leads the train like a drill sergeant but he gets points for allowing a vote whether or not to keep the drunken SOB and his family in the group. He also stands out for me as the type of alpha people are looking for. Strong, both mentally and physically, dependable, willing to listen to others and take their advice, responsible to the point of worrying over whether or not he will be an able father and husband. He admits that he thinks he needs Clarissa more than she probably needs him.

Clarissa and Dawson’s nursing and first aid skills are consistent with what would have been standard for the time. Positive strokes for this.

The fact that Dawson doesn’t have a Damascus conversion to God helped me truly believe in his change of heart. But I will be honest and say that this book probably isn’t for anyone who doesn’t want to read about religion in a big way. And Clarissa ought to be convinced that he actually loves her, instead of just wanting some husbandly rights, after he’s nursed her through a cholera outbreak.

Another thing I liked is the fact that Clarissa is honest with Dawson about what happened to her first marriage and how this is affecting her trust issues. Likewise, Dawson reveals his distrust of religion from the beginning. At least they each went into their marriage knowing the truth instead of subjecting readers to Big Misunderstandings later on. I also like that the Bible passages are germane to chapters they preface.

This book won’t be for everyone. I did feel like I was being preached to and that certain characters aren’t viewed as worthy merely due to their religious beliefs or lack thereof. But there aren’t too many wagon train themed books being written now and I like that you haven’t turned your back on your older, more sensual backlist after having written in this newer-for-you subgenre. My grade ends up being a C+ but for many readers their mileage will vary.