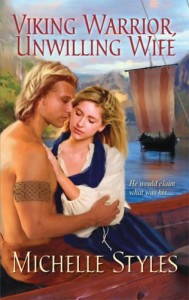 Yeah, finally book two in your Viking series. Or at least book two over in North America. I still don’t understand how Harlequin and Mills and Boon decide when to release what where. Greater minds than mine must be at work here somehow.

Sela and Vikar have a past. A bad past that includes a marriage made for all the wrong reasons and ended for ones just as bad. Vikar needed the political connections from marriage to a powerful Jaarl’s daughter and Sela hoped for a man she could respect and, perhaps, care for. The vicious court life didn’t help them communicate and when Sela had had enough, Vikar never came after her despite her message to him.

Now the tables have turned and Vikar has arrived with his men to avenge a raid made by her father’s men. When Vikar doesn’t find the Bose the Dark in his own hall, he suspects a trick is being played. The man is as slippery as an eel and not to be trusted. If he can get Sela to go for her father, Vikar can follow and nab him. But things don’t go according to his plan and the two end up traveling together through the wilderness to Bose’s bolthole. Will they communicate any better now than they did four years ago?

I was initially worried about the set up of the conflict. Here we’ve got a couple who already dislike each other and now one is a captive – of sorts – and they’re off in the wilderness. Forgive me if I foresaw plenty of Sela stomping her feet, defying Vikar and getting into trouble from which he had to then rescue her all while he acted the alpha male. Blech to that. It was, therefore, with a deep sigh of relief that this never came to pass.

In all your books, I’ve always admired how you manage to work everyday historical facts and details into the story without it appearing to be an info dump of all the neat things you learned while researching the book. For “Viking Warrior, Unwilling Wife,” it is the details on the formal surrender of one Vikin jaarl to another, the myths and fairy (for lack of a better term) tales the Vikings had for their culture, and a little of the marriage ceremony – though I read from your author’s note that this is by necessity speculation since so little is known about the actual nuts and bolts of what they did.

Sela starts the book fighting with her father’s men to defend the hall against the invaders. Usually historical women swinging swords makes me grit my teeth but in this case Sela is pressed to do it as her father can’t manage due to his stroke – or as he puts it the witch who cursed him. When things don’t go well, it’s not because Sela doesn’t know what should be done but rather because she doesn’t have command of the young, untried men she’s leading.

Vikar calls Sela predictable after she escapes from her father’s hall in search of him and her son, but as the book shows, despite their years of marriage, neither knows the other all that well.

I like that Sela has some idea of where she wants to go after her father has formally surrendered to Vikar. She’s not just running blindly away from him for spite or as a way to put herself in danger so he is forced to save her.

Children, especially young ones, are another teeth grit for me in most romance novels. Kjartan isn’t actually in the book that much though Sela’s overriding love for him drives many of her actions and takes up a lot of her thoughts. I was glad to see him acting like a child of three and – praise be – not lisping or seeming too old. His jealousy of the man taking his mother’s attention – when he didn’t know Vikar was his father – and his retreat to his mother’s shadow after a show of bravery are so three year old. His intense interest in his toy horses and desire for a real one were nice touches too.

"I am playing with my horses,’ Kjartan said, looking up again. An entreating smile crossed his face. "Do you want to play with me?’

"Yes.’ The one word was all he was capable of.

"You can use this one. He is my favourite.’ Kjartan held out the horse Vikar had saved from the tottr men. "He was a very naughty horse, running away from me, but Mor found him and brought him back. He’s safe now. He’s with me.’

Vikar cast his eyes up to the skies blinking rapidly, but a single tear escaped and trickled down his cheek. With impatient fingers he pushed it away. He doubted if he had ever cried in his life. Not even when he had seen his father’s broken body lying on the ground after the berserker had killed him. But a simple request from his son and he found it impossible to speak. Vikar drew deep on his discipline and regained control.

"I would like that very much.’ He knelt down in the dust with Kjartan and took the horse. He turned it over in his hand and remembered how he given his cloak for it. He was pleased he had done it without knowing who it truly belonged to. He could understand in a small way why Sela had risked her life for the toy. "I have many horses in my house, but none as fine as this one.’

"Real ones?’ Kjartan’s eyes shone. "Mor promised next birthday I could have a pony of my own, a golden-maned one.’

"I am sure that can be arranged,’ Vikar said. Mentally he went through his horses. There was at least one that would be a suitable mount for Kjartan. He would make sure he had the proper training. He touched Kjartan’s hair with a finger. Light, soft and totally like Sela’s. "Should you prove an adequate horseman.’

Kjartan’s green gaze pierced him. "Some day I’ll be a great warrior like my father and I will need a horse.’

"I am sure you will be.’ Vikar barely managed to say the words.

"Mor said you are a great warrior, a great Viken warrior. Do you know him? My father?’

Some people will find Sela’s excuses to hide the existence of his son from Vikar unbelievable but, as she explains it to him, her reasons were entirely, well, reasonable. Since he had told her he didn’t want children, since she didn’t know him well enough to be sure he’d accept their child and since if he rejected the child, there was every chance Kjartan would have been left to die or shunted to an inferior place in Viken society I think she sincerely felt she made the correct decision. Those facts would be enough reasons for me.

By the end of the story, Sela and Vikar have had several chances to finally admit to the other the mistakes they made in their marriage as well as admit them to themselves. Both assumed things, accepted things others told them and allowed their immaturity to decide how they reacted to outside influences. I was delighted to see not only how they began to communicate with each other but also that they were being honest to themselves. Neither is solely the bad guy, both behaved somewhat foolishly but mainly because they saw things differently, went into their marriage for the wrong reasons and – bane of all marriages – failed to talk.

I lmao to see ox-like Ivar offering Vikar advice on marriage and how to keep your wife happy. I wonder if he’ll ever succumb to Thorkell’s matchmaking? Vikar’s final declaration of love to Sela is heartfelt and complete but I had a little trouble believing that this otherwise strong man would bend himself that much – and in full public view of the hall.

I generally seem to include tons of questions about things you use in your stories – which is a good thing since you pique my curiosity. Who or what were the tottr men? How does one play tafl? And the custom of retrieving a sword from a burial mound is something I’m glad to see has fallen from favor in modern weddings! Double blech.

So score another victory for the non-Regency and this one definitely doesn’t have a Duke/spy in it. I hope you’ll continue to be able to write what I guess would be called more ancient historical books along with your nineteenth century ones. B for this one.

→ Jayne
Previous article: Two Special Auctions in RomanceLand
Next Post: REVIEW: What I Did For Love by Susan Elizabeth Phillips