Warning: may include spoilers

After finishing “Empire of Ivory,” I wondered where you’d take me in the follow up book. Answer: through the wringer. “Victory of Eagles” sees Temeraire and his captain Will Laurence having to face the results of their actions – seen as treasonous by most of the military – which ended “Ivory.” 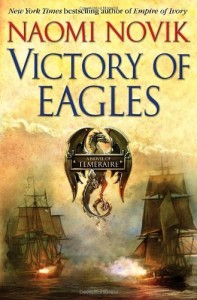 I mentioned how while reading the series, one needs to be alert to the major and minor changes you’ve made to the actual history of the times. Unlike Patrick O’Brian’s famous Aubrey and Maturin books or countless others written in the same vein, the Temeraire books don’t stick exactly to what really happened. And with this story, history is not merely bent, it’s twisted like a pretzel.

Things start out slowly with Temeraire sinking into mental and physical despondency in the breeding ground in Wales. After what he and Laurence do to save the dragons of Europe and the world, the two are separated upon their return to England. Laurence knows what he faces while Temeraire only slowly begins to understand just how the military views what they did. Laurence is now a condemned traitor, kept alive only to assure that Temeraire will behave himself, stay in the breeding grounds and provide the nation with more dragon eggs. Temeraire has to amuse himself by quoting passages from the Principia Mathematica to ward off his boredom. But unknown to his keepers, he’s been let in on a way to learn news of the outside world. And what he learns horrifies him.

Yes, Laurence is alive but living a life of misery on the prison ships anchored on the Thames. That is until the French finally begin their invasion of England. Using state of the art tactics, they neutralize many of the Naval vessels while sinking others. When Temeraire is told Laurence’s ship went down with all hands, his willingness to stay a prisoner in Wales ends. Instead he organizes and leads the other dragons there in defense of the nation. After all, they’re intelligent, they know war tactics. Who needs to be in harness to fight for one’s homeland?

I enjoyed watching Temeraire’s natal steps towards becoming a Whig politician. Sure he wants to fight but he has to persuade the others that it’s the right thing to do after the French land on English soil. And it’s not an easy task once the other dragons begin to learn how the French honor the rights of their Armee de l’Aire. Temeraire himself sometimes has a hard time overcoming his own qualms due to his knowledge of how the dragons of China live as well as what he saw while in France. In those countries, dragons are not feared, as in England, but are treated with dignity and respect. And given treasure!

Soon, the dragons learn first hand how the invasion will change their lives as the French begin to secure their position around London following the disastrous defeat of the English Army. I admire how you make me believe in the events you invent. The quick rally to fight for London, the way the French manage to position their troops for the counterstroke, the realization that a general retreat to Scotland is the only hope to preserve what’s left of the English forces, how it’s the dragons who work out the method used to transport the French so quickly all over England and how they manage a 19th century equivalent of the evacuation of Dunkirk.

This book has quite a bit more action than we’ve seen in the past few stories yet you manage to work in a nice bit on the ethics of war. The price asked of the dragons and their crews grows to horrific proportions. Yes, it’s in defense of the nation and the people of England but asking them to forgo their honor exacts a terrible price even as it finally begins to even the odds and force Napoleon towards the battle Wellesley devises to rid England of the Corsican invader.

And speaking of Wellesley, I adore his foul mouthed blunt speaking and brilliant strategizing. It’s so in character with the famous quotes he made in real life and the battles he engineered. As well, the sly nod to Patrick O’Brian was a delight to read. I loved the fact that we get to read more about the strong bonds between the dragons and their captains and crews. Plus we get to see Temeraire’s love of flash and glitter.

Temeraire was pleased that, to his eye, their own force was much the handsomer. A great many of the Frenchmen he could spy wore long drab coats, with scarcely a touch of color, and otherwise were largely in white breeches and white shirts – none too clean, Temeraire noted – with very ordinary dark blue coats. He much preferred the vivid red coats which dominated their own army. They had also several companies of soldiers in the center in colorful and patterned skirts, instead of plain breeches; and of course their flag was by far the more interesting.

While I was reading the book, I wondered ahead what would follow. With Napoleon’s crushing defeat and the taint of treason still clinging to Laurence and Temeraire, what could they do next and where would they be allowed to go? But once again, I needn’t have worried as their fate is decided in a way that stays close to military discipline as well as to the historical events of the times. Now having finished the heart pounding excitement of “Victory of Eagles,” I only wonder how I’m going to last until next year. Write quickly. B+