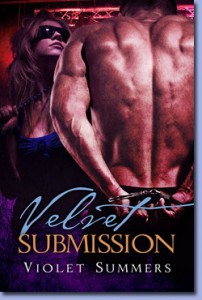 I picked up this book because it was a romance with a female dominant and a male submissive, which is about the only reason I read straight romance nowadays. And while I enjoyed it, it has solidified for me that BDSM romance is mostly about fantasy fulfillment rather than verisimilitude. I’m becoming more accepting of that fact but it’s still disappointing to hope for a romance with BDSM-identified people I might realistically meet and get instead…a fantasy. But then what is any romance but fantasy, right? Where/when/why does the desire for stark reality bend to the needs of the story? I don’t know, but this story was too much fantasy, not enough reality for my tastes. (I’ll reiterate here that the “reality” I’m looking for is psychological, emotional reality, not complete James-Joyce-ian stream of consciousness of actual reality.)

One of my biggest problems with this book, however, was something else, and something that effects even my plot summary: it’s so obviously part of a series of romances that it was difficult to follow a lot of what was happening. Characters were either past or future main characters of their own stories and it got to be very annoying and rather confusing when more and more characters piled in for their own cameo. Not only did I not understand all the character connections because of this sequel-baiting, the timeline of the story was strangely off.

For example: in some near past, Megan Jamison went to a club called Velvet Ice and found herself very much at home in its more private upper floors, which are a BDSM club, but was barred from it because of her friend’s feud with the club owner, a plot point that was obviously important to the larger series but was so irrelevant to Megan’s story it was maddening. In some measure of time, she manages to rate a private room at the club. This plot point (will she or won’t she get in to the club) is unnecessary to THIS story and drags out the beginning so that it’s really slow, rather than focusing the beginning of the story on the interaction and tension between the main characters.

As a Domme she needed to call the shots. She didn’t want to give over control, and that’s exactly what happened when she made love. So, to protect herself, Megan had compartmentalized. She kept sex tame and vanilla-‘and infrequent-‘and saved her passion for Velvet Ice. She couldn’t, wouldn’t let the two merge.

But Gregori doesn’t just want to submit to her, he wants a full D/s relationship. They go back and forth on this, with him pursuing her and her refusing him, until finally they have a showdown in which she tops him and bests him and retreats:

She’d fucking Mastered his fine ass, and kept her composure the whole time, proving once and for all that for her, D/s wasn’t about the sex.

The throbbing between her thighs said she was a liar.

He then begs to be only her lover, rather than her submissive, because having any part of her is better than nothing. And then of course (and very quickly) they work things out and all live HEA.

But what I’d really like to see is a BDSM romance with characters who just accept that they ARE kinky, without needing reasons for it. I mean, angst about that is fine (needing to beat someone and/or be beaten to get off — rather than *choosing* to, as shown in this story — is a very difficult thing to accept, after all). But angst about manufactured reasons about WHY one likes to beat someone up and/or be beaten for jollies is a different thing and rings false to me. I stress the “to me” part of that. This story might and probably will work for other readers without my own personal hangups. Because, like I said, the emotion is strong, the sexual tension is good, the characters are enjoyable.

→ SarahF
Previous article: Thursday Midday Links: Global Is the Future
Next Post: Friday Film Review: Everyone Says I Love You