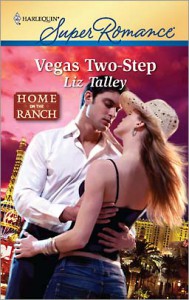 What does a Cinderella heroine do when what she did in Vegas doesn’t stay in Vegas? When, in fact, it follows her home and then dogs her footsteps around the small Texas town she calls home? It seems she panics a bit, denies some more then manages to pull out a sexy finale.

Nellie Hughes is in a rut. A fashion and dating rut, which she knows about, but does little to change before some comments from a few junior high school cheerleaders serve as a wake-up call. Stung by the thought that they, and an octogenarian, think she’s dowdy she calls Kate, a friend who lives in Vegas, and makes plans for a week long stay and makeover.

On her way there, she meets a jaw droppingly handsome man, whom she dubs El Magnificent, and feels a connection with him. Which he just as obviously doesn’t feel. But with her makeover complete Nellie – now Elle – hits the Vegas clubs and who does she meet but El Magnificent – aka Jack Darby, owner of the hottest nightclubs in Vegas. They meet, they greet, they get together and start a whirlwind romance then Jack stuns Elle by talking marriage. Which is when she loses it and tells him about how he dismissed her the first time he met her. Then she storms off.

Thinking that’s it, Nellie is shocked when Jack shows up in Oak Stand, Texas. Not only shows up but has bought a ranch, announced he’s going to live there and then starts after her. Nellie and the population of Oak Stand are in for a whirlwind courtship.

This almost seems like two books to me. Vegas and then Post Vegas. Nellie is convincingly turned into Elle – well not so much turned into Elle as much as her inner Elle is let loose. A haircut, highlights, contacts and some new clothes changes her outside but her inside still balks at $300 for a pair of pants and still smarts from the way Jack paid her no attention when she looked dowdy. But let’s face it, what El Magnificent guy would have checked her out given the way you describe her as looking that evening?

I guess it’s a lifetime of not getting the guy that wells up in her and lets loose when Jack gets serious but methinks she comes across as slightly over the top. He might not have fallen at her feet in the airport but he does seem to be getting to know her now, feeling comfortable with her now and making all the noises a man makes when he’s thinking of settling down. Instead of saying, “that was me then and this is just a change in outward appearance now so where do we go from here?” Nellie throws the baby out with the bath water, acts irrational – her words – and storms off.

Now, if I were Jack, I’d be thinking “whoa, this lady has issues” and “narrow escape.” Wait a minute, he does think the first thing. But this is RomanceLand so Jack immediately puts his Vegas place on the market and buys a ranch, sight unseen, in a town he’s also never seen and sets out to woo Nellie/Elle. One question: how did he find her since she never told him her last name or where in Texas she’s from? Did he ask Kate? At least his sister recognizes that he’s jumped off the diving board without even checking for water in the pool. Oh, and I liked Jack and Dawn’s relationship. Dawn acts very Big Sister: thumping Jack on the head for doing stupid things yet ready to defend him against anyone else who tries it.

When Nellie returns home and Jack arrives in Oak Stand, I was braced for Small Town Cutesiness which, thank you very much!, I didn’t get. These people are fairly normal and (I laughed at this comment) just as smart as big city folks. And while the contractor Nellie hires to redo her kitchen is a pervert (why does she keep him on after she knows he’s been through her underwear drawer?) I adored her growing friendship with Bubba. When you first introduced him to the story, I think I actually groaned out loud yet he quickly became my favorite secondary character.

The story started to sort of drag a bit here. Jack and Nellie have various encounters in town and Nellie’s still mad at him and the town is entertained, etc., etc….It’s Jack who finally makes his move and verbally challenges Nellie in a turn which still seems to me to be more Romance Hero than real guy but it at least gets things going and makes Nellie think, which leads to our HEA. What saves this whole resolution of their future is the fact that you make them talk to each other and be honest with each other.

Hmmm, so to summarize, I like that in the end, Nellie and Jack are talking honestly to each other and plan on living in a nice, small town that isn’t filled with Quaint Characters. I’m glad that Jack sees beyond the outer Nellie and loves the inner person she is and that Nellie heeds what Jack suggests and realizes that Elle is just another part of herself. And even if I don’t completely buy how they get from Point A to Point B, I’ll still give the book a C+

→ Jayne
Previous article: REVIEW: Fantasy in Death by JD Robb
Next Post: Thursday News Thread: Penguin and Amazon Have Kissed and Made Up