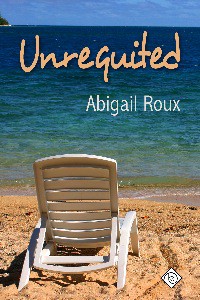 I opened this file when I got it because it wasn’t paranormal (no world building…I’m so sick of world building) and because you wrote it and I adore your Caught Running with Madeleine Urban. That said…meh. So many holes, such annoying characters, unbelievable timeline, so much potential angst wasted, wasted I tell you!

Vic the lawyer loves Owen the sheriff and part-time bailiff. Owen uses Vic as a fuck buddy and has done so for five years, which is tearing Vic apart. Or at least, so I’m told. Shane the judge is Vic’s best friend and convinces Vic, on 12 hours’ notice, to go on a month’s vacation. Apparently, public prosecutors in North Carolina don’t have to clear their schedule to go on a MONTH’S LONG vacation. I think I need to go to law school. As we learn…eventually…Shane loves Vic and has done so for…yes, you guessed it, five years. But as the entire story is told from Vic’s not-quite-first-person perspective, Shane’s emotions pretty much get lost and ignored in Vic’s angst and general cluelessness. Which is a shame. Vic, of course, comes to realize the relationship potential in his best friend and finally gets a clue.

The first scene is set up brilliantly…and then goes nowhere:

Victor Bronsen tapped his pen against his temple slowly.

The defense lawyer was speaking in a low, monotonous drone. He was new to this district, brought in from somewhere else by the family of the accused man, and he obviously didn’t know how short Judge Trammell’s temper was when it came to stalling or pontificating.

Vic glanced up at the bailiff, Owen Montgomery, who stood stock-still with his blue eyes narrowed, looking at the defense lawyer like he might like to hit him soon. Owen was a big guy, with thick blond hair, a full beard, and wide shoulders that made him look a little like a lion. He wasn’t the type of guy you wanted to piss off.

Et cetera. Brilliantly set up. I read this and I was so psyched for the rest of the book, because it seemed so evocative of character and setting and I thought I was in for a treat of a book. But then…nothing. The judge is not Shane, which would have made for more tension, more literary impact. The judge in the scene does not eat the defender. Nothing happens. It’s like showing the gun over the mantle-piece and then completely ignoring it for the rest of the play. Aargh!

Even more infuriatingly, Shane’s judging a case that requires police protection for…like eight hours? WTF? Don’t mention a dangerous case and police protection if you don’t do anything with it. It’s not real life, it’s fiction, and things need to have meaning, rather than being random, especially in a 100 page story.

And then the drinking. This is why I do not like Nora Roberts’ early categories: everyone’s drinking and smoking. Yuck. While I understand that two to three men at the beach for a month might drink pretty much all the time, I personally find that an incredibly unattractive trait, which transfers to unattractive, unsympathetic characters, to my mind.

I kept waiting for both Shane and Vic to grow some. Both of them sat around for FIVE YEARS and didn’t talk with the object of their unrequited love? Shane’s excuse was that he knew that Vic loved Owen. Vic’s excuse was that he’s a pansy-assed coward and just…yuck. And after five years of angst (so we’re told), he switches to Shane in a month? And I’m supposed to believe in the HEA? Not so much.

Also, the tourist trip through North Carolina? Unnecessary because you don’t actually DO anything with it. It doesn’t reveal character; it doesn’t further the plot or heighten the tension — mainly because there was very little plot and even less tension. It’s just a travelogue. “Look, kids, Big Ben!” No no, that’s something else…

The book was mildly amusing. But I only finished it because I was waiting for Vic and/or Shane to grow some and they didn’t. The ending was vaguely interesting and gave me two seconds of warm fuzzies. But generally a pretty forgettable book. So forgettable, in fact, that I’m proud of myself for remembering to write the review. But then, I’m doing my best to avoid grading.

This book can be purchased in ebook format from Amazon and other retailers.