REVIEW: Too Good to Be True by Kristan Higgins 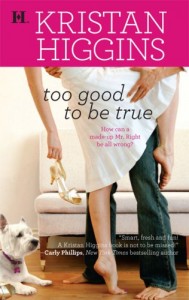 When Grace Emerson’s ex-fiancé starts dating her younger sister, extreme measures are called for. To keep everyone from obsessing about her love life, Grace announces that she’s seeing someone. Someone wonderful. Someone handsome. Someone completely made up. Who is this Mr. Right? Someone…exactly unlike her renegade neighbor Callahan O’Shea. Well, someone with his looks, maybe. His hot body. His knife-sharp sense of humor. His smarts and big heart.

Whoa. No. Callahan O’Shea is not her perfect man! Not with his unsavory past. So why does Mr. Wrong feel so…right?

When I start one of your books I know I’m going to get a few things in it. It will have memorable (at least to me) characters. It will be humorous. There will be at least one dog. It will be first person POV from the heroine. The hero will [probably] not initially appear to be her best romantic choice. The dialogue will be wonderful. The heroine, and often the hero’s, occupation will be central to her/him and presented as an integral part of her/him. The fact that true love never runs smooth will be shown through the relationships of the secondary characters. The heroine will be somewhat martyrish in her relations with her family. The heroine will be flawed in how she views the men she meets in her book long search for love.

I think that covers most of what I expect to find. And most of it I’m looking forward too since you handle these things so well. But the last two issues….well, sometimes they can drive me nuts.

I love your characterizations even if sometimes I don’t care for some of the characters. But then I’m not meant to care for them all, so that’s okay. But they’re definitely not cookie cutter people who feel as if they’re pulled from any of the previous romance books I just read last month. From Grace’s father, who shares Grace’s passion for Civil War reenacting, to her mother who creates, um, interesting blown glass sculpture, to some of the teachers with whom Grace attempts to instill knowledge in the heads of today’s youth, to Grace’s terror of a grandmother, they remained unique over the course of the book. Never did I have to stop and think back, “now, who is this character again?” The one exception would be Julien who I wish hadn’t been such a stereotyped Gay Best Friend.

The humor and dialogue of your books go hand in hand for me. As I read yesterday, I startled my own dog and cat several times by clutching my sides and laughing out loud. Humor is an individual thing, I know, but yours works for me just about all the time. Even when it does tend to stray in the direction of slapstick. I especially like the fact that the humor doesn’t seem cruel – if that makes sense. And you know when to turn it down or cut it off instead of milking it past the point of funny.

I love books in which the characters have pets and obviously love them – even if the people might appear a little foolish about it at times. My pets are my children and I talk to them all the time. Yeah, cleaning up hairballs and the occasional mistake isn’t fun but like Angus McFangus, Kitty and Puppy are worth it. If a hero doesn’t like his heroine’s pets, he’s not a keeper IMO, so Cal’s willingness to deal with the Westie goes a long way with me.

Grace’s profession is such a part of her. She lives and breaths history, literally in the case of her weekend reenacting, and finds fun ways to try and get her students to realize the importance of the past. I enjoy watching her at work and the passion she shows for it in her presentation when applying for the Department Head job. As for Cal, well, let’s just say that ex-cons generally don’t work so well for me because they’re usually dripping with angst and eager to act like asses. But here you have him keep his cards close to his chest until the revelation of his past will have the most impact. Kudos for having him insist on not hiding it either.

The fact that not every couple in the book has a “fluffy bunnies” marriage is a plus for me. Because let’s face it, that’s usually how real life is. But you also let us glimpse that no one who’s not in the relationship knows everything that goes on in it or how a couple has chosen to make it work. I also like that the final conflict between Cal and Grace is the result of what’s gone on in the whole book and of their respective pasts, not something cooked up at the last minute to get those last 20 pages of story length.

All good things must come to an end and here’s where I start in on the things that don’t work so well for me. Your heroines usually seem to have willingness to put up with demands from their family that exceeds my tolerance. Sure, be a good sister/aunt/daughter/whatever but don’t be a doormat. This is a constant issue for me with a lot of romance heroines so maybe I’m the one who’s out of step but I wish it hadn’t taken until the showdown at Soleil for Grace to stand up for herself. And while her procession of blind dates is an improvement on those in “Catch of the Day,” do all your heroines have to endure “Dates from Hell” on their way to wedded bliss? But at least Grace seems a bit more toned down about why she is searching for “Mr. Right.”

So, I’m still looking to give you that “A” that I so desperately want to. But in the meantime, I’ll laugh my way through your books and enjoy the ride. B