REVIEW: Tipping the Waitress with Diamonds by Nina Harrington 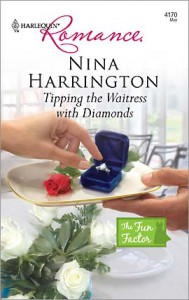 Celebrity chefs and cook off challenges aren’t my passion. I like to cook but hate to clean up so having one hanging around my kitchen to do my scut work for me would be nice, though. And if he looked like I imagine Brett Cameron does, that would be a bonus because Brett is such a sweetie. Sienna is great too but somehow the conflict of this story gets lost in their niceness.

Sienna Rossi has just won her plum, dream job and been sideswiped at the same time. Sure she’s the new manager at the swanky restaurant she’s been working her ass off at for four years but Angelo Peruzi, the new celebrity chef she’ll be working with, is the man who dumped her four years ago. Desperate to get away and think about what she should do, she grabs a bag and heads down to her aunt’s trattoria in London. Only to find that Aunt Maria is off to Spain and Brett Cameron is cleaning up the kitchen.

Brett has some downtime while his first signature restaurant is in the finishing stages and doesn’t hesitate when Maria calls him for help. She’s laid up recovering from appendicitis and needs someone to cook at her trattoria for a few days. Brett is happy to help this woman who gave him a break as a trainee chef but dismayed to discover how run down the place has gotten. With the clock ticking, he and Sienna race to get the place refurbed and earning money again while they grapple with the attraction they feel for each other.

As I said, both Brett and Sienna are nice people, great friends and hardworking foodies. I like that so much of the action revolves around them doing their professional things. Brett is a great chef who knows his way around a saucepan and I enjoyed reading about him finalizing his signature dishes. I could be seduced as Sienna is by early morning tastings and having this hunk hovering over me, watching my every reaction to his mushroom creme sauce. I’m also happy to see a hero with dyslexia who does something other than go into sports to compensate for his problems learning to read.

Sienna knows how to redecorate and present a dining room to catch the eye and interest of customers. She’s organized, can multi task and work with others to achieve the final product in record time. All things I would expect someone with her experience in top notch dining places to be able to do. She also loves working as a sommelier so the scenes of her mentally pairing wines to Brett’s cooking are a nice touch.

I do like that you don’t take us down the standard romance paths with these two. I would have expected Brett to be the new chef with whom Sienna will have to work at her regular job but he isn’t. Then I would have expected some misunderstandings to occur based on the past these two do have but a few quick explanations serve to clean those up. And you don’t create any new personal problems for Sienna and Brett to work out either. He loves her wonderful family life and doesn’t dwell on his own childhood problems. She sympathizes with his thwarted first romance and would love to see this fantastic guy get the woman he deserves. At the three quarters point of the story I sat thinking, “where’s the conflict?” Not having Brett and Sienna clash over the usual stuff I would expect is great but not having them clash over anything is getting boring.

The issues that Brett deals with – getting his restaurant ready to open while coming up with signature dishes – aren’t exactly earth shattering. While Sienna’s trust issues are quickly dealt with once she sees the man who broke her heart and ruined her faith in chefs. Jeez, one afternoon with Angelo and Sienna’s seeing him for the asshat he is and wondering why she wasted four years of her life agonizing over him. So did I.

There’s a lot I like about this book. The hero and heroine are people I enjoyed reading about and whom I wanted to have their HEA. I like that you incorporate their professions into the story and include little things like how Brett’s hands are roughened from years of actual work in the kitchen and how Sienna’s wardrobe is a product of her position representing the upscale places in which she’s worked. And I flat out adore the chapter headers. But a lack of conflict between Brett and Sienna and the too quick resolution of what conflict the story has ultimately average out the grade to a C.