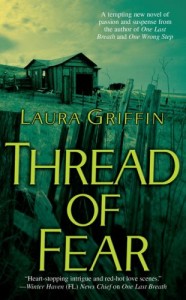 You impressed me with your response to my review of your previous book, “One Wrong Step.” When I finished it, I wasn’t sure I would care to read another of your books. But your email offering me a copy of “Thread of Fear” sparked my interest because a) of your gracious offer and b) due to the heroine’s profession. I will admit to being a real life CSI junkie and faithfully watch A&E’s “American Justice” and several other cable programs dealing with real life detectives and those who help them solve crimes. I also have a cousin who works in law enforcement and her main duty is to follow up on crimes involving children. So I’d like to dedicate this review to her and all the officers working hard out there.

Fiona Glass is a talented artist who teaches at a community college. She spends far too little time working on her own art – she’s finally got a gallery show coming up – due to her third job. Fiona is one of the most talented artists working with law enforcement officers trying to get sketches of the scumbags of the world who’ve committed crimes. Her dating skills might be a little rusty but she’s got the magic touch when it comes to getting victims to open up and recall the details of the people who are wanted by the law. Even when they don’t think they know anything or saw anything or are too afraid to remember, Fiona can get them to describe who dunnit and then make drawings that help crack cases and put perps behind bars.

But she wants out. Her own career as an artist is stalling due to the long hours and stress involved in traveling to interview the victims then finishing the sketches. And then there’re the hate letters and harassment from the people she’s helped put behind bars. After one move to get away from a gang leaders’ minions, she doesn’t want that starting up again. She’s made the decision to quit after this last job to coax information from a scared six year old witness to his older sister’s abduction. Once this drawing is done, so is she.

If only Jack Bowman would let her. He’s not the type to take “no” for an answer no matter how many times he has to ask. He thinks Fiona’s skill is his best shot at linking a rape/abduction survivor case and a recent murder case. His small south Texas police department doesn’t have the money for a lot of fancy lab work and with the state labs backed up for the next decade, okay maybe decade is too long, but backed up for a while, if he can get a good likeness description from the woman who got away, he might be able to put this bastard behind bars.

However, there are a few things about the case he doesn’t tell Fiona after she finally caves in. And even after she works her magic, she warns him that he might be better off not using the drawings she’s produced. Her reasoning makes sense – and is something I wouldn’t have even thought of – though it pisses Jack off to hear it. When a witness is found who saw the murder victim’s body being dumped, Fiona is called again and the case begins to pick up speed. The killer is beginning to lose control and Fiona finds herself in deeper danger than she’s ever been.

One thing I just have to mention is that you know how to end each chapter on a note of suspense which lured me into continuing, whether or not I had any planned breaks for eating/dog walking or whatever. And as in “One Wrong Step,” the police procedural stuff sounds fantastic. It’s not laid on with an overly heavy hand either. Usually the balance of suspense and romance ends up being off for me with rom/susp books but in this case, it felt just right.

I love the character of Jack Bowman and not because he’s perfect. In fact, living with him might be a pain in the ass. I laughed when Fiona calls Jack on how cops act puffed up and swaggery and his dismay as he wonders if she’s right. I cheered when Jack tells the county sheriff exactly what he thinks of him. I was dismayed when small town politics jerked Jack around and surprised at the way that thread ended – though it’s probably more realistic than the usual Romance Land ending. And Jack is so ‘guy’ in his physical response to Fiona and to the threats that come her way.

Fiona is better than the usual romantic suspense heroine. She is emotional about her work and cares about the outcome, yet she’s got enough of a survival instinct to leave town when she feels the harassment is becoming dangerous. She’s also not going to let herself be sucked dry to a husk by the demands of a job that will never end. And she’s packing a gun, and knows how to use it, that even impresses Jack.

Jack unzipped her purse. It was small and stylish, made of supple black leather. He never would have guessed she carried a fucking cannon around inside it.

“Where’d you get this?” he asked, pulling out the revolver. It was a Ruger .357 with a six-inch barrel.

He checked the cylinder. Loaded. “Who’s your grandfather? Jesse James?”

I did wonder about her relationship with her sister. You dropped some vague tidbits about their past which I assume will be fleshed out more in the next book.

There are, I’m afraid, a few things which bothered me. After behaving herself so well for most of the book, Fiona has a TSTL moment. I understand there is something in her past which drives her and she is locked and loaded but for all that, she quickly gets herself into deep doo doo. I will give her points for realizing she screwed up and for trying to take back control of the situation. She also does a neat job of getting away from the villain. Points deducted for her brief dip into “Oh, everything is my fault” martyrdom at the end.

Another thing which generally bothers me is the “tell all” scene at the end when the villain(s) Reveal(s) All. But in this book, we actually are left with several loose ends. For the most part here, I don’t mind that the villain is being tight lipped. It’s probably much more realistic. But I did wonder about a secondary character. How and why did he get involved with the killer?

“Thread of Fear” entertained me, made me laugh and had me madly turning pages at the end. I thought the conflict between Jack and Fiona was realistic and pertinent to the story. Your description of the town and people of Graingerville was spot on. And the snippet for “Whisper of Warning” has me impatient to know what’s going to happen to Courtney. Thanks again for enticing me to read this book. Strong B grade.