Dear Ms. Laverentz,
Recently I read one of Jane’s reviews of a sports themed novel (using football instead of hockey). You use the world of the NHL as the background for your hero, Eric Cameron. I’ll be honest and admit that I know just enough about hockey and medicine, the background of the heroine Dr. Emily Jordan, to be dangerous. But I do know a lot about romance novels so I will have something knowledgeable to say in this letter. 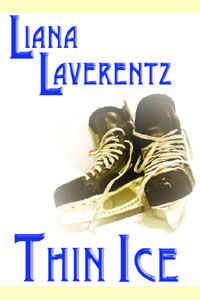 Let me start off by saying there are a lot of issues going on here. Emily’s hectic life as a trauma doctor in the ER, Eric’s career as a high profile pro hockey player, Emily’s single motherhood and relationship with her 8 year old son, Robbie. Eric’s past as a brawler and loner. Emily’s past as an abused wife following her upbringing in a house ruled by her tyrannical father. Eric’s rough childhood with his single mom and his terrible first marriage with a gold-digging ho. And that’s all before Emily and Eric even meet and then have to work out their own relationship in this minefield of their pasts.

You handle all these fairly well. Some are more superficially relayed than others but I can tell you put a lot of time into researching all this and trying to make it realistic. However…I think there’s just too much stuff in this one book. Too many Traumatic Pasts, too many areas for misunderstandings – even if you do resolve a lot of these without letting them drag on past a few pages. There are just so many problems that have to be examined, dealt with and resolved for everyone to reach their HEA. By the end of the book, I was dragging and just wishing to finally get Eric and Emily together once and for all. I also felt they headed into marriage without discussing a lot of important issues such as the fate of the Saints and Eric’s playing career.

As for getting them together, it seems as if each 100 pages of the book would start with them warily eyeing each other, trying to work on a relationship, then something happens, and Emily pulls back leaving a bewildered Eric floundering as he tries to figure out where he went wrong. Rinse, repeat and start again. I got tired of Emily turning him away over and over. Eric has the patience of a saint – no pun on his team name intended – and is willing to try again a few more times than I believe any man would, even if he is fascinated by brainy women. He’s sweet, kind, loving, gentle, willing to give talks at schools, help out single mothers, drum up support for charities and is probably working on world peace in his spare time between hockey games. The man is simply too good to be true. But I did like how he shows his feelings for Emily by having her car repaired.

Emily is shown to be realistically dealing with being a single mom and a busy doctor. You do mention her grueling schedule, lack of sleep and having to be called back in to deal with an overflowing ER. I laughed my ass off at her comments about the bar brawlers. But actually, I think you did well in choosing her specialty since ER doctors don’t have rounds to make or regular patients to see. Thus she can schedule things to do and people to see during her off hours. I got frustrated with her apparent caving into her ex-husband’s demands not to see Eric even as she gives her battered ex-mother-in-law advice about fleeing her abusive marriage. But at least by the end of the book, Emily is standing on her own two feet and no longer cowed by Ryan.

At one point around midway in the story, I was wondering if we’d ever see Eric on the ice and as a hockey player. It took awhile but we finally got there. While the details might not be enough for a true hockey fanatic, they were good enough for someone who barely follows the sport. I think Eric’s – ahem – enthusiasm for mixing it up on the ice provides another realistic conflict in his relationship with Emily. But I don’t think that placing his team in the same city with another pro hockey team would get past hockey fans nor the outcome for the team after the season ends.

There’s a lot to like in this book, a lot that works. But there are enough problems I had and bookmarks I made while reading it to keep the overall grade at a C. For me, it would have worked better without quite so many issues to resolved. Oh, and maybe without the slightly sappy epilogue.