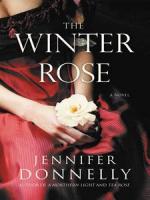 When I opened the package containing the arc of your latest book “The Winter Rose” I gulped. Reason one: it’s got a very nice cover. Reason two: it’s a hella lot of book. 700+ pages of trade paperback sized book to be exact. It’s the type of book that requires a big time commitment from a reader. Not only because of the length but also because of the plot and intensity of the read. Readers who have longed for a return to the sprawling sagas of days past will rejoice, I think. That is if they really want to read this type book again. As I read it, I unfortunately found that that type of reader is not who I am anymore.

After a trip over to the Big Internet Bookstore to check out reviews of the prequel to this novel, “The Tea Rose,” I found that a lot of readers must want to read this genre again or for the first time. Reviews ran heavily towards five and four stars. However it was the three and under ones I chose to read and I found that they eerily mirrored my thoughts on this book.

For me “The Winter Rose” began as an enthralling trip back to the past. First we get a glimpse of the East London world inhabited by not only the poorest of citizens but also gangsters, crooks, and thieves. It’s a heartless world where only the strong survive and one of it’s strongest men is Sid Malone. Sid’s a leader in the crime world. We see how he’s feared by fellow criminals and the police and how he can be ruthless when anyone invades his turf. But he also inspires unswerving loyalty from those he’s helped and those he leads. Since he’s the hero, he has to have an inner core of goodness and not be beyond redemption so we learn that Sid never wanted to be a criminal. Life forced him into it yet he thinks he’s too far gone to save. But Sid has a past that won’t let go of him. There are people who want to save him and others who want to use him for their own ends.

Then just as quickly the action turns to the other side of the social coin. India Selwyn Jones, daughter of the upperclasses, has just graduated from the London School of Medicine for Women. Mostly cut off from her disapproving family by her career choice, she plans on working with the poor in a Whitechapel clinic. She’s young, idealistic and loaded with morals. I just knew of the compromises she’d have to make and eye opening moments she’d face. India quickly discovers that the poor aren’t poor just because they’re lazy or sick because they don’t know about eating good food. The lessons she learned in medical school run head first into the brick wall that is poverty.

Yet even as I read what I knew was coming, the world you’d created was so intense and well described that I would sit for two hours at a time, churning through a 100 pages a go. Of course Sid and India cross paths, of course they clash, of course they find their common ground of caring for the desperately poor people of East London and of course they eventually fall in love. But as I waited for these two to finally come together, I had to recall that in a saga, this could take a while.

I had to also recall that sagas are generally composed of a large cast of characters, that resolutions often take place over years and action occurs over vast geographic distances. This book is no exception to that. For three hundred pages the story sprawls across London, we get to know people — learning Hallmark ‘meant to tug at your heart’ backstories for most of them — and are filled in on what happened in “The Tea Rose.” In the next one hundred pages the world of the story begins to contract as all these vastly different people start to affect each other a little more than I would think is normal except in this type of story.

Then all hell breaks loose and for one hundred pages we reach what would normally be the climax of a story. Revenge, betrayals, heartbreak and some resolutions. And then it struck me that I was only 500 pages into the book. And that the hero and heroine had just been separated and some close to irreversible things — for the year 1900 — had just taken place. Oh no, I thought. I still have 200 pages to slog through. It was at this point that I finally acknowledged to myself that I’m just not a saga kind of girl anymore.

It was more with a feeling of “gotta get through this” rather than anticipation that I squared my shoulders, picked up the book again and plowed on. Improbable coincidences, lots of heartache, and melodrama fill the rest of the book which picks up six years after the above mentioned “shoulda been the end.” Sid and India meet up again, still thinking the worst of each other though never having stopped loving each other, the villain strikes one last time and just when I think that finally — finally! — these two will get their HEA, you separate them again!

At this point, I was mad. I had had enough. The HEA was okay but I got more of a feeling that Sid and India had finally been deemed to have suffered enough. I also was left with a feeling that certain key points had been shoved down my throat: Poor = noble and rich = slimy bastards. That certain characters were amazingly quick to connect plot points and intuit what needed to be known just when it needed to be. And that this book was just too long. As I said, I’m just not in the mood to watch characters being put through a wringer for 700 pages before being allowed to be happy. Saga lovers will probably devour this book and it is a good example of the breed. But I want my payoff sooner now so it’s a C read for me.

Can be purchased in hardback or ebook format

→ Jayne
Previous article: The Sex Made Her Do It
Next Post: Mercy Thompson to be Comic-ized