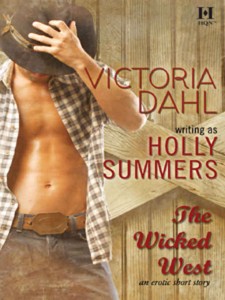 Lily Anders has come to Wyoming from England after inheriting a house from her brother, a young widow looking for a new start in what we now call the Old West. Her next store neighbor, Tom Hale, is the upright, slightly uptight sheriff of their little town, and he’s not at all sure about the tempting Mrs. Anders. Neither is Lily, for that matter, as she is only beginning to learn about herself beyond her unusual desires in the bedroom – her desire, specifically, to be dominated. And in Sheriff Hale, she recognizes a man who would be the perfect rule-enforcer.

But Hale is hardly out of that particular closet; in fact, the very presence of Lily Anders stirs a discontent Hale has worked hard to sublimate, turning his dominant nature to enforcing the law, a safe, socially acceptable alternative. So when Lily begins to show Hale what he could have, illustrating graphically her various charms through her uncurtained window late at night (her bedroom is right across from his), Hale is simultaneously aroused and ashamed:

This was a law-abiding town, and he was the sheriff, for God’s sake. If Mrs. Anders was a whore of some kind, she belonged on the other side of Center Street, where decent folk could ignore the goings on if they chose. She didn’t belong here, two doors down from the schoolmarm’s house and half a block away from the church. She either had to cut out her little show or she had to go. . .

"Fuck," Hale spat impatiently. He was hard as a rock now. He’d end this today, but he couldn’t stomp over there in this state, or he’d likely have her against the wall before he could deliver his lecture on propriety. Always pragmatic, he simply took himself in hand and pictured Mrs. Anders. It took only a few minutes of stroking before he was done. Problem solved.

Problem not solved, of course, not nearly. But the pleasure of The Wicked West is watching these two stubborn people work out a way to express their true selves while in the same room. And even though the story is primarily a sexual exploration of their relationship, it is also a story of self-awareness and self-acceptance. And it mirrors the central conflict between Ben and Molly in Talk Me Down, namely the way in which Police Chief Ben is upright and confident in his work enforcing the law, while Molly represents some unknown wickedness (she refuses to reveal her true occupation), a temptation that Ben cannot resist but one he can’t completely trust, either. And in the same way Molly is working through issues of trust and self-acceptance, Lily moves into her own place of physical, financial, and emotional independence. Like Molly, Lily has anxiety about disappointing and disrupting her family, and it is debatable which gets the true clean slate in that area.

The best thing for me about The Wicked West was its mixture of heat and fun. It’s not rigorous in detail or history (as a small example, at one point Hale calls Lily "baby" during sex, and despite the lack of a specific date, it seemed like late 19th century), and the romance-ey ending was curt, but it’s sensuous without being crass, and nicely consistent in both the internal themes and in its link to it’s alter-existence in Talk Me Down. Like that longer work, the relationship between independence and interdependence takes center stage, and in some ways, both works are reflected in Hale’s entreaty to Lily to make their relationship more formal:

"I’m not looking for a pledge, Mrs. Anders. Just a chance. A chance to be myself with you, and to offer the same to you, independent as you may be."

I don’t know how I would have evaluated this story if I hadn’t read Talk Me Down, but having enjoyed both, I would give The Wicked West a solid B.
~Janet

The romance is inextricably tied up (harhar) with what we would recognize today as Lily’s and Sheriff Hale’s sexual identities. Lily happily identifies as a sexual submissive and a masochist, without using those anachronistic words. Hale is a much more unhappy sexual dominant and sadist. Unlike Lily, he is disgusted with and ashamed of his desires. He is convinced that his first marriage broke down because his wife was scared of his sexual drive, even though he never actually acted on it with her or with anyone else. Hale gradually comes to accept himself through his interactions with Lily. Although they both still — very realistically, historically — label what they do “wrong,” they both are content with their innate sexuality by the end.

I love how you overturn so many stereotypes in this story. Lily’s first husband was old enough to be her father and a sadist-and Lily loved what he did to her. Lily, the sexual submissive and 19th century lady, knows what she wants and goes after it without shame or question, whether that’s Sheriff Hale or her own independence. I love how you show the power inherent in her position as a submissive -‘ in fact, it’s one of the first things we are shown about her:

When her green eyes rose, they didn’t look the least bit timid despite her soft voice. In fact, they flashed with strength before she lowered them again.

I shouldn’t be doing this, he thought calmly, as he lifted his hand and arced it hard toward her bottom. The first hard snap of sound cracked a dam inside him. Lily’s loud gasp pushed the floodwaters free. Pleasure roared through his veins, unlike anything he’d ever felt. Not just physical pleasure, but hot, red joy as well.

You show how these characters need each other, need the other half of themselves, not just in romantic, emotional entanglements, but in sexual compatability. At one point Hale says to Lily:

And therein lies the romance. A hot, sweet, perfect little read. Thank you for respecting your characters so much. Grade: B+

This book can be purchased ONLY in ebook format from the Sony Store and other etailers.