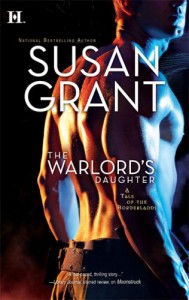 While SF isn’t what I read the most, I still enjoy an occasional foray into the genre. I like that I don’t have to worry about historical accuracy since the very nature of the beast allows you, the author, to literally make it up as you go along. All I have to do is hang on for the ride.

The war is finally over. But Wren’s life is in tatters. The only living offspring of the notorious Drakken Warlord, her genes could very well start a new dynasty of terror. And the Coalition can’t have that.

She alone holds the key to finding a legendary treasure. Having seen enough bloodshed, shy, petite Wren vows to destroy it before anyone, Drakken, Coalition or Earth, can get their hands on it-‘but she’ll need help.

The Drakken’s ruthless evil turned Aral toward the Coalition years ago. War is all he knows, until he finds passion and love in the most unlikely of women-‘the Warlord’s daughter. But will trusting each other with their secrets risk not only their hearts, but their lives?

One of the things I like so much about this series is that a reader doesn’t have to have read the first book, “Moonstruck” or the “Otherworldly Men” series in order to follow the action. It’s possible to pick this one up and jump right in.

I do like how this series isn’t written strictly in order. There is overlap with some of the past books. Also, I feel you keep new readers up to speed with past events without bringing the action of this book to a screeching halt while the backstory is filled in.

Given that I don’t read much SF, I still think that the world building is done well. Readers with more experience in the genre might disagree but for the SF layman (or woman), it works. The suspicions and tensions of all sides for the others that we saw in “Moonstruck” still make sense. A 1000 year old war has just ended months before and it’ll take a long time before everyone is one happy family. The reasons behind Aral’s betrayal of the Drakken Horde are understandable and I had no trouble following him into his actions.

Some things aren’t handled as I would expect – which is good. I like being surprised like this.

I also wanted to know what would happen next. How were Wren and Aral going to work things out? Would Bolivarr regain his memory and what would be the implications from that for him professionally and in his relationship with Hadley? Would Vantos get to rise above hauling chem-toilets and show the devilish streak I could see in his character?

The story kept me flipping ebook pages and eager to see what you’d do next. So keep that in mind while I now nitpick. This might piss you off but I think it shows how closely I was following the plot and how much I wanted from the book.

Wren and Aral meet one time 10 years ago and he just instantly knows that they’re in love? And keeps her close in his heart for that long til they meet again? Then when they finally meet, Wren wants the trappings of marriage – by which I guess she means nookie – but not marriage. At first she’s infuriated at Aral’s presumption of their marriage then – suddenly! – she seems to have agreed that they’re married and is soothing him and looking forward to a complete marriage. It’s not often that something is both drawn out and rushed at the same time.

As I was reading, I noticed lots of repetition of sometimes the exact same phrases such as to describe the intentions of each side during the war or Wren’s feelings on wanting the trappings of marriage but not the trap. And if Goddesses ruled this world and are the ones prayed to, then why do the characters constantly say “by the Gods?”

There are lots of plot threads. Some from previous books and new ones as well. There’s a ton of stuff going on here and while some of it is knit together well, the ending does feel rushed. As if you’d loaded the story with elements then suddenly realized you were running out of space to tell them all. Will some threads be resolved in later books?

Some readers might feel the story is a little heavy handed with religious politics. It feels sometimes as if you want to comment on current world affairs and are using the book as a platform. I could be totally off base here.

Aral becomes an emo guy fairly quickly. He’s been a top ranked Battlelord for years, has done some nasty things but suddenly is giving Alan Alda a run for it when he realizes how he doesn’t want to pressure Wren and angsts over how she feels trapped by marriage, etc. Bolivarr is also a very emo guy for someone who was a big, bad wraith.

Hadley comes across a few too many times as the uncertain “farm girl from Talo.” Though I did like her maneuver which earned her a pass to the rank of captain. To her credit, she displays sound leadership skills while traveling to Ara Ana. But, after mooning like a schoolgirl over Bolivarr and wanting to smooth locks of his hair off his brow, for a short time she seemed ready to quickly give up on the man she loves and their chance at happiness.

I kept being told how wonderful Wren is, how she has an inner core of steel but…I just didn’t see a lot of this. Wren comes across as small, plain and, well rather like her name, a little brown wren. Then suddenly she’s a take charge leader. I never felt I saw the change in her before she rises up and take command. I guess this is supposed to be her warlord DNA coming out in a good way.

I’ve mentioned in other reviews that I want to see villains punished for what they’ve done. It was kind of anticlimactic.

After paragraphs of harshing, you’re probably disgusted with me again. Damn Jayne hardly ever gives me a good review, the beyotch. So I’ll end with some rainbows and happy bunnies. Vantos reminds me a little of Han Solo though Kaz is definitely not Princess Leia. But both intrigue me and I plan to be along for whatever you’ve got in store for them. C+

→ Jayne
Previous article: REVIEW: Made To Be Broken by Kelley Armstrong
Next Post: REVIEW: Temptation and Surrender by Stephanie Laurens