REVIEW: The Things We Do For Love by Margot Early 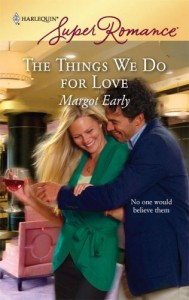 When I read the blurb of your latest book, I wasn’t quite sure what to expect.

The man Mary Anne Drew wants is marrying someone else! So to win him back, she buys a love potion. Mary Anne’s not convinced spells and potions work, but still, she has to do something.

Then strange things begin to happen….

Graham has never shown any interest in Mary Anne. In fact, their arguments are legendary. But now Graham is acting anything but hostile! Could the potion really work? Or was Mary Anne looking for love in the wrong place all along?

Was I going to get a funny book? A silly book? A paranormal? After all, we are talking about love potions here. I think you managed to add some lighthearted feeling to a book that is actually full of serious issues.

Mary Anne truly feels that she and Jonathan Hale would be a perfect match. They both have journalistic backgrounds, work at the local radio station and Mary Anne has always felt a “zing” around Jonathan. But I did wonder, if she’s mooned over him for so long that even casual acquaintances remark on it, why has she never acted on the attraction before and asked Jonathan out? Or to have coffee while they’re talking about her weekly radio work? Has she basically just sat on her ass the whole time?

When Jonathan’s true colors begin to show, I started to think about why Mary Anne would think she’s attracted to him. I guess the fact that Mary Anne hadn’t seen him too much in personal circumstances – only in professional ones – accounts for the fact that she missed this. I like the way you have Mary Anne slowly see Jonathan for how he really is rather than just including one “he’s a total ass” scene.

A fear of losing himself despite his love for Mary Anne is unique reason for Graham not to commit. However, if I were Mary Anne and facing “the morning after” and he started backing away, I’d still feel like smacking him upside the head. At least Graham hasn’t totally sworn off dating at all. And his breakdown did sound fairly dramatic. I could see why he doesn’t want to go through that again. But as his mother says, not acting on love just to avoid the risk of losing someone is silly.

Snakes are an interesting way to get a couple past the “admit to each other we’re in love” stage. Poor Graham does have to face his worst fears to save the woman he finally is willing to admit he loves. Let me just add that as a snake non-hater, I’m glad Graham didn’t have to use “the Holy Hand Grenade of Antioch” during the rescue scene.

I totally agree with Mary Anne about white shoes in October. Just not done in the South. But I’m telling you, these people are freakin’ obsessed with their recycling. And did we need to get a description of each outfit a character was wearing when they entered a scene?

Though you switched PsOV within a scene, I managed to always know who’s POV I was reading at all times. This might be something that annoys readers though.

I like the use of the radio program to help Graham and Mary Anne work out their personal issues. Especially since Mary Anne is from a family that doesn’t talk about things that upset them while Graham uses discussions to make his living. If not for their radio show, they might not have ever worked out their relationship.

Mary Anne’s sudden forgiveness of her father and mother’s situation was fast but perhaps the way Graham handled things opened her mind and allowed her to see beyond what she’d held close to her heart. I think his act of kindness to her during the election coverage is one of the nicest things I’ve seen a hero do for his heroine in a long time.

Did Graham intend to insult Mary Anne with his ass comment? What about the introduction between these two? When Mary Anne said something snide to Graham and then tried to back out of it? Cameron’s later surliness will only be forgiven due to her circumstances. One thing I’ll say is that these characters aren’t all nice, not to themselves, not to each other either.

Bridget, Paul and their mother need to have their lips sealed shut. Taking pot shots at each other is one thing but using something that should stay private is unforgivable. The number of people I’m commenting on brings up a last issue. Namely there are too many characters all with their own issues and relations to each other. My mind kept having to readjust to new people, learning who they are and how they fit into the story.

But I love the final resolution to the conflict with the radio show in the hospital room. I love Buzz. I love the Rabbit of Caerbannog. I’ll stop before I start quoting passages from the film.

I closed the book – actually I turned off my Sony – with the feeling that hopefully Graham and Mary Anne aren’t going to perpetuate the communication problems her parents have. And is there a future book for Cameron? I think so. But I do wonder if Graham is going to be able to deal with discerning what’s a garden hose and what’s a snake from now on? B-