What a struggle I had with writing this review. I know some ask what are the hardest reviews to write and I am convinced, after drafting and redrafting this one, it is the review of the book that you love. Because as a reader, I am trying to convey the beauty that is someone else’s writing so that others will see the same beauty. The best thing I can say to readers is to go the bookstore and read the first chapter. 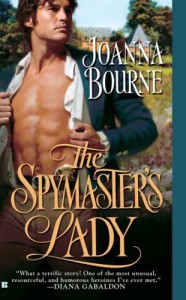 The Spymaster’s Lady is about secrets. It is about the secrets the characters keep from each other. It is about the secrets that you, the author, keep from the reader. Annique, the Fox Cub, is an intentional mystery to Grey, the British Spymaster. But Grey is a mystery to Annique as well. Both characters fail to fit in the predetermined slots each has set for the other. “A man itches to peel you, veil by veil, laying your secrets bare, opening you up to reveal mysteries.”

However, the truth behind the secrets, the reveal, is always there for both the reader and the characters to see. It wasn’t until I read the book for a second time that I realized how brilliantly all the clues were laid out, like crumbs on the forest trail, for the reader to see. You even tell us, through Annique, that all the answers are there for the taking. “You ask many questions. Have I told you that? Now pay attention and I will teach you secrets.”

Because this story is so much about secrets and the constant reveal, I hesitate to say much about the plot at all for fear of giving too much away. Annique is a spy, trained from a very young age to be in the “Game”. It is believed that she is in possession of the plans to Albion, or plans for the French invasion of Great Britain. She is captured by another spy named Leblanc for her knowledge. She is imprisoned with two British spies, one gravely wounded. She escapes through cunning and guile and helps the English spies away as well, believing, in part that she would not leave anyone with Leblanc and that perhaps her good deed will come in handy down the road now that she is free to play the “Game” again. There is honor amongst spies.

Yet, Grey recognizes Annique instantly as someone who was involved with the death of his men at Bourges. That coupled with her knowledge of Albion makes her an irresistible capture. Even then, Annique is so skilled it takes three men to do the job. Over the course of the book, Grey and Annique play a cat and mouse game and Annique is often the winner.

The story is well devised because the conflict between Grey and Annique serves to be a metaphor for the larger Game played between spies. It isn’t always strength that wins either the game of love or life, but intelligence, quick wit, and craftiness.

One thing that I think will be universally exclaimed over is the use of language in this book. Annique is French and every thought or sentence that is uttered by Annique has that French flavor. Grey is English and his mannerism and way of speaking is also strictly English. The book has very few dialogue tags, if any, because a reader can gather immediately who is the speaker through the rhythm and phrasing of the words. It’s really a triumph.

The English spy spoke, deep and slow, out of the dark. “I would stand and greet you politely.” Chain clinked. “But I’m forced to be rude.”

It was a measure of how lonely she was that the voice of an enemy English came like a warm handclasp. “There is much of that in my life lately. Rudeness.”

“I remember what we have done together. I am almost sure it was not decent.” But she let him comb her hair back with his fingers and tuck a blanket around her and arrange her at ease along the seat. “I will decide what to do about it when I am awake. Perhaps I will try to strangle you once more. Though you have the most beautiful body imaginable. Like a large animal.”

Adrian murmured, “What complex and interesting nights you two must have.”

“The English spies in Italy had a similar arrangement. I am all comprehension.”

The reason for the A- is that I felt that the emotional response of Annique to the reveal of one the biggest secret of the book was one that was not in keeping with the story that was built. But by that time, I wanted Annique to be happy. I was desperate for her HEA and would accept nothing less. In the hands of a less skilled author, it might have been a breaking point for me, but in this book, it was only a minor issue. I simply can’t wait for the next Joanna Bourne. I am all breathless anticipation. A-

You can purchase this book in ebook and mass market.