REVIEW: The Smuggler and the Society Bride by Julia Justiss

Thank you for sending me a copy of your latest book, “The Smuggler and the Society Bride.” Despite it being the third full length book in the “Silk and Scandal” series, I found that I could jump right in without feeling I was missing vital information or at sea about who the characters from the two previous books are. But while I liked the two leads and enjoyed watching them fall in love, I found the villain to be both too melodramatic and too silly. 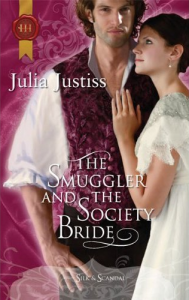 Lady Honoria Carlow has discovered just how quickly a young woman of the ton can go from being a Diamond to an outcast. High spirited all her life, she’d tried the patience of her family yet never gone too far. Until the night when her downfall was cleverly and maliciously arranged. Now she’s An Example to other young ladies against meeting a man in the gardens during any ball. Fleeing London ahead of her dictatorial brother’s orders to return to their house in the country, she’s sought refuge with her aunt on the coast of Cornwall.

It’s here that she meets a handsome young Irishman who’s in league with the smugglers of the area. Gabriel Hawksworth is doing a favor for an old military buddy in captaining the man’s ship for 6 months. He’s had fun doing it but not as much fun as when he sees a young woman strip down and dive into the ocean to attempt to rescue a drowning man. Attracted to her from the start, Gabe has no idea what has brought this beautiful and intelligent young lady to the area but knows there must be some scandal in her past since she ought to be in London for the Season. Is there a future for this couple of misfits and can Gabe discover the reason and identity of the unknown person who methodically set out to ruin the woman he’s falling in love with?

I like that Gabe is a gentleman and knows not to go too far with any woman much less a well brought up one. And that Honoria has had enough experience with men in London to know when a man is interested in her and also to know not to trust one too far. She’s been burned by men so her choice to teach the young girls of the village in order to give them a leg up in a world which is stacked against the female gender makes sense. The change in her character from slightly spoiled society miss to one who will be happy living with a ship’s captain as they sail the world is slow yet believable. Ditto the dawning of love for Gabe who’s always enjoyed females yet never, until now, wanted to settle down with just one.

One thing I really like about this book is that Honoria isn’t some ignorant ninny who’s never wondered about sex or the opposite sex. She’s frankly interested, takes the time to check Gabe out when they’re both dripping wet from saving the revenue agent, and doesn’t turn down her aunt’s offer to read “Aristotle’s Masterpiece.” And Aunt Foxe! Whoa, here’s a female relation whom all young Regency misses would want for that “night before the wedding” talk.

Honoria and Gabe seemed to suffer from changes of heart due to plot needs. Honoria starts out, and for the most part remains, angry at what happened to her and mad at her family for not standing by her or believing her innocence. Yet, for a brief time, when she’s telling Gabe the story, she suddenly changes and is all “I can see it from their [her family’s] POV.” Then she flips back. While Gabe begins by almost persuading Honoria of the necessity, the almost rightness, of smuggling yet just as suddenly at the end of the book, when it’s needed, he admits that the illegality of it bothers him and he now wants out.

The villain also didn’t work well for me. It’s almost too easy for Gabe to discover who is behind Honoria’s ruin and the confrontation scene, where the villain Tells All and laughs while he does it is cartoonish. With six more books in the series, I know that it will be a long time before the villain is brought to justice and the whole thing is wrapped up and honestly, I can’t summon enough interest to keep going to see it happen.

So, for the hero and heroine’s love story and Honoria’s avid interest in sex, I’d recommend the book. However the flip-flop in Honoria and Gabe’s attitudes and the villain subplot detract from what would have been a more enjoyable book for me. Overall, for me these balance to a C grade.