“If life is cheap, how much is love worth?
It’s 1914 and young Rose Courtenay has a decision to make. Please her wealthy parents by marrying the man of their choice – or play her part in the war effort?

The chance to escape proves irresistible and Rose becomes a nurse. Working in France, she meets Lieutenant Alex Denham, a dark figure from her past. He’s the last man in the world she’d get involved with – especially now he’s married.

But in wartime nothing is as it seems. Alex’s marriage is a sham and Rose is the only woman he’s ever wanted. As he recovers from his wounds, he sets out to win her trust. His gift of a silver locket is a far cry from the luxuries she’s left behind.

What value will she put on his love?”

The lovely cover for your book “The Silver Locket” caught my attention even before I knew anything about the plot. When I discovered it is set during World War I, I knew I had to try it. But even though I found it well written and researched, ultimately the telegraphing of the major plot points and the final fate of one of the characters left me slightly dissatisfied. 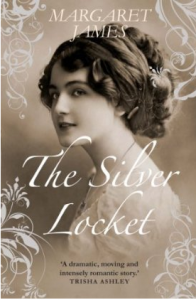 The book begins in prewar 1914 and continues through 1919 thus putting it in what I call the saga category. Add to that the fact that the central characters are involved in such a horrible war, and I knew that there would be plenty of separations, heartache and tragedy. At this point in my life, I’ve discovered that usually I don’t care for these long, drawn out stories anymore. But in this case, the separations are skipped over thus mitigating that aspect I don’t care for.

The historical elements seem to be well researched and are included in a way that flows with the story rather than clogging it up with “oh, look at all the information I uncovered while writing this book” details. While the early section of the book seems a touch bland, once Rose runs off to London to be a nurse and Alex reaches the trenches, the color and intensity of the narrative hightens. I like that you don’t go overboard with high flown phrases or TMI about the nastier details of nursing or life at war. There’re a gracious plenty to adequately illuminate what’s going on without too much to gross out.

However, there is a tendency to include sign posts of upcoming plot points. When you included information about how nurses could be injured moving from one railroad car to another, I knew sooner or later Rose would be injured thusly. Ditto when Rose blithely tells another nurse that Red Cross trains were never bombed and that she wanted to go to Russia as an adventure because nothing would happen there. It was like road construction signs warning of upcoming detours and delays.

The story is about much more than just Alex and Rose. It’s chock-a-block with other characters though they do all center on Rose and Alex. While I like having a rich blend of secondary characters to fill out the plot, in the end, it felt as if a lot of these people were in the story enough to annoy me trying to remember who they all were without being much more than cardboard figures trotted out when you need to heap another roadblock in the road to Alex and Rose’s final happiness. I needed either more or less of them.

And my weren’t there roadblocks galore. Marriages, babies, class differences, adultery, parental expectations, the evil villain, supposed death, injuries, and disinheritance along with the war and its attending horrors were all things for Rose and Alex to overcome. I don’t mind that true love never runs smooth and that the heroine and hero will have to work for their HEA but as I read along, it felt like a check list of soap opera points that needed to be included.

And let’s look at the villain of the story. I won’t mention a name but it will be obvious to readers whom I’m talking about. Like a bad penny he keeps turning up throughout the story, right when he’s needed to sow discontent and act as one of the aforementioned roadblocks. And though I can see that he can’t be made to pay for his crimes and misdeeds before the end of the book – since he needs to be available to wreck more havoc – I’ll be honest and say that his ultimate fate pissed me off. “What?!” I sputtered. “He does all these things, causes all this trouble and *this* is how he’s made to pay?” Okay, I can see that his class and connections would protect him to some degree from official condemnation and accountability but for me he needed to pay, and pay dearly, even if only privately, for what he’d done.

So, the abundance “I knew it was coming” Murphy’s Law events plus the seemingly endless obstacles to our HEA lessened my enjoyment of the book.
The story is technically well written, I wanted to know what would happen, wanted Alex and Rose to find their happiness, appreciated the time you took with research and how nicely it’s added to the story but when I close a book slightly depressed, it’s not a good sign. I’m sure readers who want to watch a heroine and hero triumph over a mountain of obstacles on the way to final bliss will like it better but for me it’s a C-.