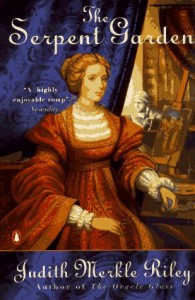 As I look back on the books of yours that I’ve read, two central themes stand out. 1) How helpless women were during most of history and 2) how it’s better for the little people to get out of the way of the powerful ones when those people are throwing their weight around. “The Serpent Garden” is no exception.

Susanna Dallet thinks she’s a happily – well, sort of happily, and she does try with The Good Wyfe’s Book of Manners – married woman. Her childhood nurse Nan knows differently. In fact, almost everyone in London knows that Master Dallet is a swine who’s dallying with a married lady and who only married Susanna for the painting secrets her father taught her. It takes his dead body delivered by his mistress’s husband’s men along with all his creditors descending on Susanna for her to learn the truth. And then what is she going to do? Women aren’t allowed to be master painters and she’s got bills to pay.

And this is where she begins to break the law, get in trouble by becoming involved with the High and Mighty men of the day and find love. Though of course she doesn’t know it then. By the time she and her true love evade the men trying to kill them in Paris, they’ll have rubbed shoulders with Archbishop Wolsey, Henry VIII, his sister Princess – and later Queen of France then Duchess of Suffolk – Mary Tudor, most of the French court, most of the English court, a horrid lawyer, and a truly horrid magistrate, antiquarian, and master of the conjuration of demons by the method of Honorius. Plus the Priory of Sion, an angel, cherubs and a lower class demon with style aspirations!

There are many times when Susanna will lament the fact that she’s got tangled up in the affairs of great men and women. Several instances when she’ll get pissed at the man she ultimately ends up falling in love with while he gets pissed back. And lots of things she’ll end up doing to support and save herself and others that would never have crossed her mind to imagine doing.

The book is rich in detail – sometimes almost too rich as we often get a run down on the fabulous clothes of the rich and famous every single time they appear in a scene – and portrays life early in the reign of Henry VIII at the level of the lower and middle classes. Life was hard then for anyone but especially hard for unfortunate women left at the mercy of a fate with no strong and caring man to look out for them. And even those men often viewed women as empty headed baubles fit only for bearing children. Men were against them, laws were against them and often fellow women were suspicious of any woman who broke ranks. It’s little wonder Susanna feels overwhelmed as she tries to support herself and Nan.

But Susanna is no saintly, long suffering woman nor is she a strident proto-feminist. She is a woman of her times who enjoys good food, a warm house and someone to love her. For her, painting is breathing and she could no more give it up than stop living. She’s also got a delicious, sly sense of humor.

It WAS IN THE YEAR 1514 THAT FATE AND MY SINS SENT ME INTO THE WORLD AND THENCE TO THE COURT OF THE KING OF FRANCE, A VERY WOMB OF INTRIGUE FROM WHICH NO RESPECTABLE ENGLISH WIDOW SUCH AS I WAS MIGHT HOPE TO ESCAPE UNSCATHED.

Little steps lead to the pit, they say, and I must admit I was overfond of nice clothes and the better sort of wine, to say nothing of the great wickedness of making indelicate paintings for the sake of the handsome sound of money chinking in my purse on market day. They led me a long way, my sins, from a life of quiet if rather boring virtue studying drawing and the life of the Virgin in my father’s house to the worldly deviousness required of a limner to gentlefolk and paintrix to princes. Ah, that sounds grand, doesn’t it? Vanity, yes, that’s another sin of yours, Susanna, I say to myself. And that doesn’t even count the greater ones. Sloth. Shameless deception. And carnal love. But though I know I should repent, when I think on temptation and where it led me, I find it hard to be sorry.

I can easily see how this book would not be for all tastes. It’s told from several PsOV, first person through third, and is almost too detailed in places. Then there’s the whole paranormal/supernatural aspect of a demon, two imps, an angel, several cherubs and in the end, two archangels. Any or all of these aspects might be deal breakers depending on the reader. But the characters were so wonderful, the setting so rich, the emotions so universal that none of it mattered to me.

I love that Susanna uses her wits and skills to save the day yet that she doesn’t turn into a Wonder Woman. In the end, she’s still got her faults and fancies. Roger loves her for who she is and by books end, he knows exactly who she is and that she won’t change. Nor would she be happy or they have the kind of marriage they could have if he were to ask, much less demand, change of her.

For me “The Serpent’s Garden” is a strong B+ though I would hope potential readers would keep what I’ve said about it in mind should they decide to give it a try. Despite reusing the two themes of the book from several previous novels, I think you manage to keep your plots fresh, your characters lively and your books delightful.