REVIEW: The Russian Bear by C. B. Conwy 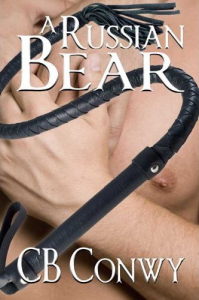 Mischa agrees to help a friend out by meeting someone in a bar (ALERT: flimsy excuse for a meet-cute). He is stood-up, however, and mistakes his actual date (who he thinks might be called Tim) for a random cute guy called Tom and embarrasses them both by using this time-honored conversational gambit:

“So, tell me what you like. I can string you up and whip you ’til you scream, or you can get down on your knees and suck me off with your hands tied behind your back. I will fuck you, though.”

He saw the incomprehension on Tom’s face change to shocked surprise and knew that he had fucked up. Big time.

Ya think?! But Tom, despite expressing outrage, doesn’t hit him or storm off. Instead Mischa apologizes profusely, they flirt awkwardly for a bit, then Tom oh so innocently asks Mischa if this is how he normally meets his “slave boys.” This part annoyed me. I mean, yes, they have to meet, express interest in each other, and then go off and fuck, as they do. And I love that they’re not meeting in Sooper-Sekrit BDSM Klub of Sexx0rring, as I said. But Tom’s internal monologue is SO shocked and innocent at Mischa’s ham-handed little speech, but then suddenly he’s expressing interest in the incredibly weird and scary things the guy threatened to do to him? Without any indication before that, to the reader or, apparently, to himself, that he might even the teensiest bit submissive? Whatever.

But — and I’ve had this issue a LOT recently — there’s very little narrative tension to the story. Lots of sexual tension, but very little will-they-or-won’t-they-have-their-HEA? There’s a bit of fear on both sides that they are more emotionally invested that the other man, but on the whole, there’s no barrier, internal or external, for either man to break through or for them as a couple to overcome. Sure, Mischa has his “one sub, one scene” rule, but he throws that out very early and with no angst. And Tom wonders every now and then what the hell he’s doing, because, really, letting some guy crush your balls in his fist and getting off on it is not exactly normal sexual behavior. But they’re pretty much too busy having great sex and falling in love to really worry about it. Which is great in real life and makes a good and lasting relationship, but doesn’t make for a really strong *romance novel*.

This book is one of those stories non-romance-readers think defines romance: two people meet and fall in love. We all know, instead, that romances are instead the story of when two people meet, fall in love, and overcome obstacles to deserve their HEA. And there are no obstacles here. Until you manufacture an external one in the very very very last chapter of the book, which just had me rolling my eyes. A lot.

→ SarahF
Previous article: REVIEW: Christmas with Her Boss by Marion Lennox
Next Post: Saint-Germain and the Lives of Women by Chelsea Quinn Yarbro