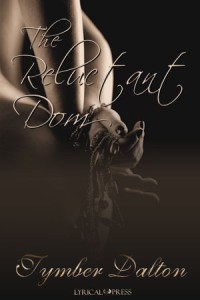 This is a very well-written book. You have strong, fully realized characters, an unique plot, a romance that is slowly developed and deeply felt, and a solid, believable happy ending. I think you have a lot of writing talent and a good eye for the genre. That said, this book made me feel dirty–not in a fun, sexy way, but in an unclean, depressing, angry way.

While this is a fictional story, the portrayal of a 24/7 M/s relationship is accurate. There is a rich diversity to "the lifestyle" that most people never know about because their information comes from BSDM fetish sites on the internet. Try to define normal, either in a vanilla or kink relationship, and it’s truly impossible.

And if your whole plot set-up weren’t, to my mind, inherently offensive and dangerous, you would have done a great job.

Some people, for various reasons, need pain. They use it. It’s how they function, how they deal with their emotions. Some use it to help relieve intense emotional pain in an external way, some use it to feel like they’re connected to life again. [ . . . ] She needs things. It helps her cope. She doesn’t feel or express emotional pain like you and me. She needs safety and security. She needs someone who will care for and about her and understand why she needs-things. Someone she can put her full trust in. It’s how she’s made it all these years.

“Then he grabbed me and spanked me. And when I looked up at him, he was just-well, sort of like you looked when you were trying to see how bad I was hurt. Horrified. I knew immediately he didn’t mean to do it. I knew he didn’t enjoy doing it.” She shook her head. “I think maybe that’s why I wanted him to keep doing it. Why I was able to promise him and keep it that time, mostly.”

Her voice dropped to a whisper. “He was the first person in my life who hurt me but he didn’t enjoy it. Do you think he just jumped into this with both feet? You know him. The only reason he did it was for me. Not because he enjoys it. Don’t let him fool you, he was just as scared as you are now. Probably even more.”

Kaden isn’t doing this because he enjoys it. Oh no. Even though he admits that the sex is hot:

“It’s not about sex, either. That’s tied into it, but in our case it boils down to giving her what she needs to function. Some people are in it for the sex. Yeah, the sex is hotter for us because of this. I won’t lie, you’ll find it’s the hottest fucking sex you’ve ever imagined. But it’s not about the sex. It’s about fulfilling a need for someone.”

God forbid it be about getting off. No, it has to have a higher purpose than that.

Let’s perform a little thought experiment, shall we. A man, hideously abused during his childhood, feels that the world is spinning out of control. In order to calm himself, to access his emotions, and to act in a way that does not result in pure self-destruction, he needs to impose order on everything around him. In order to feel alive, he needs to make others around him hurt. What do we call this man? Sociopath comes to mind for me. What do we call his lovers? Victims? What about if it’s all consensual though — isn’t that the rallying cry of BDSM? Safe, Sane, Consensual, right? And these characters present as consensual, at least on the surface. But what if he manipulates his lovers into a virtual sexual slavery without them even being aware of what’s happening until they’re so far into it they can’t see a way out because they don’t want to cause him to spiral out of control? They do it because they want to please him, but they don’t actually like it.   I think we all would recognize that as abuse. In fact, it’s horrifying to us — or at least, to me. So why is it different in this instance? Why is it NOT abuse when it’s the “submissive” basically forcing her dominant with emotional blackmail into hurting her “for her own good”? Why is the dominant in this situation not seen as abused? Because dominants can’t be abused by submissives? I call bullshit.

I told you, she’s not a pain slut. You’ll see people who put dozens of clothespins all over themselves, needles, hot wax, knife play, shit like that. She has no desire to do any of that. All she needs is the occasional grounding. That’s what the spankings are about.

I have a really hard time grading this book. Purely mechanically, I’d give it a B- I think. Seth needs to get over himself a lot more quicker and Kaden’s OCD beyond-the-grave letters and DVDs are a bit much, but the characterization, relationship growth, and HEA are strong.   But as a whole product, the story gets not just an F, but an Epic Fail. I shouldn’t finish a romance feeling furious and degraded.

This book can be purchased in ebook format from etailers carrying Lyrical Press books.