REVIEW: The Privateer by Danielle Thorne 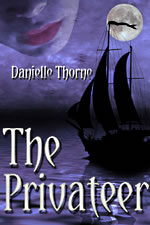 I’ll come right out and admit that this book took me a long time to get into. There’s a huge cast of characters and while this normally doesn’t bother me, here I felt adrift for ages before I finally began to get a handle on them. And not only was I adrift in sheer numbers but unsure as to which ones were destined to play major vs. minor roles.

The plot meanders along and I had to have faith that at some point you’d tie it all together. And while the title indicates that this story will center on pirates and privateers, what we see for most of the book is the Royal Navy and only towards the end do any pirates show up. Perhaps the word unsettled best describes my feelings as I read it since it took a long time to settle into the story.

There are rumors swirling throughout the Caribbean. Something major is happening and it involves a mysterious pirate. His name is uncertain, his goal is unknown and the flag he sails under changes with each attack on any ship he finds. Julius Bertrand has his spies out trying to unravel the whole mess but up until now, he and Royal Naval Captain Shane Adair have had to hunt relentlessly through the islands to try and catch their man.

Miss Kate O’Connell and her father are recently arrived on the island of San Madrid. Formerly attached to the Navy himself, Dr. O’Connell and Kate have traveled the world far from their native city of Boston in the colony of Massachusetts. We quickly see that twenty-five year old Kate is an outspoken woman whose passionate defensive and offensive debates can put her at odds with polite society. While this might ruffle the feathers of the women, many of the men admire her spirit even if they come to rue being on her wrong side.

What no one on the island knows is that Julius Bertrand is as much a hunted man as he is a hunter of men. There’s a relentless old enemy with a score to settle and if he must pillage and destroy the island to get Bertrand, he’ll do it with a smile on his evil face.

So we’ve got Kate and Bertrand, Kate’s father, Bertrand’s crew, Miriam – a San Madrid shopkeeper, the various persons of society on the island, Captain Adair, some spies, a bad pirate, a loathsome planter and assorted other characters. Who goes with whom, who I should be cheering for and who should get booed when they show up took a lot of energy as I read the story. It took a long, damn time to become engaged with the characters and there is initially a lot of stuff introduced and explained and shown that only made me shrug and wonder why you took the time with it. For some of them, I could see why you kept me in the dark but for others, a scorecard would have been nice.

In a book called “The Privateer,” I expect some privateering. I expect more swashbuckling. I expect more adventure and not just all crammed in at the end. The blend of life on San Madrid and hunt for the pirate is not evenly done. I almost forget about the privateer aspect in all the social stuff on the island. Once the action truly begins, it’s a runaway train but we have to sit and sip a lot of tea before we get there.

Kate is impulsive and outspoken yet steadily so. You make this a central part of her personality from the start and while she might temper it slightly at the end, she’s still basically the same person. Points for this. I do like how she and her father are devoted to each other and her family support from Boston shows she is loved.

Bertrand is more of a mystery. There were times when I almost didn’t like him. His toadying to Lady Spencer left a bad taste in my mouth even after the explanation of his reasons. He goes to Kate after the shark attack to probe her feelings for him then proposes to another woman? WTH? But on the other hand, it did accurately convey the conventions of the time, namely that social position was very important and that people would sacrifice their feelings to advance.

McAllister – what’s the deal with him? I was left with the impression that he felt he had in some way betrayed Bertrand but the whole relationship was never finally explained to my satisfaction. There’s also a lot of things we have to wait until almost the end of the book to understand such as how Bertrand and Adair’s plans were known to the enemy, how Meriam knows all Bertrand’s secrets and Bertrand’s history with the pirates.

I don’t understand relationship between Meriam Beckett and Kate. Most of the time, Beckett is mad and spitting at Kate, enough that you have Kate recoiling as if she’d been slapped. Yet Kate keeps insisting the two are friends and at times, Meriam thinks so too. Again, much of this just doesn’t add up.

I also had problems with some of the adjectives you used. One character is described as having violent freckles – do they pick bar fights when they’re drunk? Jewels leaking from a casket make me think of calling a plumber. At one point you say that sounds of battle travel further than sights yet the sight of the battle is what was seen, and described, first. Anger splattered Kate’s face. Like a pie fight? The image of ragged breeches working on a ship made me laugh. Kate is described as shying away as if from something she can’t see. WTF? Why shy from something that’s invisible to you? Yet I will say that other descriptions were wonderful such as the nice imaging of the island shore before the shark attack or the island forests wreathed with stars at night.

There’s lots of violence that isn’t tempered. Readers need to be prepared. That being said, this is a pirate novel and I felt it was realistic for the genre, the characters involved and the time. My bloodthirsty inner wench was happy that both Bertrand and Kate end up taking care of their personal villains. There’s nothing left for any court to decide or take care of and no one is sent off somewhere to live in exile and repent all their days. That was very satisfying.

In the end, I am glad I persevered and finished the story. As long time readers here know, I adore a book that uses unusual times and/or places so “The Privateer” does get bonus points for that. I see from your MySpace page that this is one of your first published novels so I hope that you will continue to hone your craft. Despite this grade, I look to see more stories from you. C+