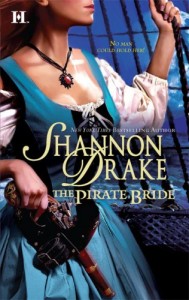 It’s about time I tried one of your books. I do believe I actually have a few in my ever growing TBR book mountains but this is the one I chose. Why? Because (drumroll) it’s A Pirate Book! I was so excited when I saw the title and cover (though it doesn’t accurately convey what the heroine wears) that I knew I had to try it. I’m a pirate book lover from way back, having cut my teeth on “Captain Blood” and other Rafael Sabatini books. But when was the last time I actually see a new (non-Regency) swashbuckling book? Oh, ages and I’ve missed them.

The date is a bit past the “Brethren of the Coast” era but still within the time frame of the pirate era as we see from the inclusion of one of the secondary characters, Edward Teach – the famous Blackbeard himself. As with Teach, Captain Red Robert became a pirate in a round about way. None of which interests Laird Logan Haggerty when his ship is cornered by Red Robert. Foolishly he agreed to transport a treasure to the Colonies – a treasure that slowed down his ship and caused him to delay recruiting more hands.

Now Logan counts on the honor of pirates to demand single combat. If he wins, the treasure is divided with half going to his crew who will be free to sail on. If he loses, Red Robert and his crew get it all plus Logan’s ship. But either way, he will remain as a captive awaiting a ransom. Logan’s not thrilled with the terms but it’s the best he can hope for and the sword fight begins.

Even though Red Robert is a pretty darn good swordsman, Logan wins. Though barely. But something’s wrong about the situation. Robert is known for being somewhat effete and the more Logan looks at him, the more he realizes Red Robert is really something else. A woman, to be exact. And further more, all the crew knows it. When they reach the town of New Providence in the Bahamas, Logan proves his mettle even as he discovers that Red is after the same man who Logan’s hunted for years.

Blair Colm is evil incarnate though he works for the Crown. Both Logan and Red ended up in the Colonies due to Colm’s habit of selling young prisoners as indentured servants. Both of them also watched Colm kill their parents. Red has made her hunt into almost an obsession, letting nothing and no one stand in her way. She knows Colm is aware of her search, though not of her true identity and is equally aware she will find death at his hands should he ever catch her.

After disposing of the treasure and resupplying her ship, Red and her crew sail off only to be caught in a vicious storm. Washed overboard, she would have drowned except for Logan’s quick thinking in following her and their luck in grabbing a barrel that washes ashore on a deserted island. Now Red’s crew has to calculate the current patterns and hope that both survived to be found. And pray that they reach the two before Colm, known to be sailing in the area, discovers them first.

Red’s got a pirate-y crew complete with pirate-y names yet none of them end up coming across as cardboard characters. You give them depth and you give them personas. Peg-leg is obviously devoted to his captain and fiercely defends her against any skepticism. Silent Sam observes everything. Both are murder in a fight. O’Hara might be too quick a convert to the flock of the Church of Red but you give him a legitimate skill to offer the crew in exchange for his life and a chance to escape Colm. However, the laundry and bath detail does come across as cloying.

You also don’t sink to relying on stereotypical behavior when it comes to the actions of the pirates. There’s not an excess of swashbuckling merely for the sake of it. Red and Logan are quite willing to fight single combat in order to avoid damage to their ships and the potential loss of crewmen. Teach fosters his ruthless persona in order to influence merchantmen to willingly surrender to him rather than resist and risk injury. Logan plays on the well known superstition of seamen to save what he can of his cargo.

Red is a strong woman, both physically and intellectually. She knows her limitations and usually sticks to them. When she doesn’t, it’s because the opportunity to gain the revenge that’s driven her since childhood is too much for her to ignore. Her quest has become so single minded that at times it does overcome her common sense.

Colm is a delicious villain. He doesn’t foam at the mouth and rant histrionically nor does he indulge in any “tell all” moments before he and either Red or Logan fight. He’s cold, calculating evil. He works within the corrupt system and milks it for all it’s worth which, in a way, makes him even more awful. He nurtures his hate, considers his punitive actions and strikes where it’ll hurt the most. All of this makes it very realistic that so many people hate him and want him dead. Also that Red will risk her own safety to be sure, absolutely sure, he’s dead.

The tables are turned slightly in the “desire for revenge” category. Generally it’s the hero who is consumed past the point of idiocy with the drive to mete out his own version of justice on the one he thinks did him wrong. The heroine, meanwhile, acts as a tempering influence on his actions and sort of reigns him in when he threatens to run amok. Here it’s Red who won’t listen to Logan’s urgings to end her quest to kill Colm, to retire with the wealth she’s made as a pirate and find revenge in living a good, happy and long life. Logan lost as much as Red but didn’t suffer as she did during his indenture so I can see that it’s easier for him to be willing to turn away from the white hot need for vengeance.

The prologue puzzled me in that we see the defining moment when Colm killed the family of one of the protagonists (and it took me a long while to figure out which one featured in it) but not both. I’m curious as to why you selected to show the actions against only one and that particular one. Is it

As I read the glowing adjectives used by Logan to describe his hoped for fiancee Cassandra (would she have been described as Lady Bethany? No, I don’t think so) I had a horrible feeling that she would morph into a cosmic shrew when she finally stepped on stage but, yippee skippee, she turned out to be an intelligent, intrepid, shrewd character who coolly measured up the situation she and her father (a wonderful, honorable man) were in and sought to ensure their safety as best she could.

Being stranded on a desert island sure is easier with a lot of salvaged cargo. Red and Logan almost had something looking like a Sandal’s resort cottage by the time they were finished. Okay, I’m being unreasonable here but I would like to have seen them have to rough it and use their ingenuity to survive rather than just cracking open yet another barrel and discovering the sugar to go in their fine porcelain cups of tea. The exception being when Red discovers a crate of books and squees with joy. Gotta love a woman who loves books. This section was useful in letting them examine their past lives and show each other their individual need for revenge on Colm but ended up circling the same topics too much. But points for their clever, is somewhat stomach turning, subterfuge to cover their tracks.

The epilogue is one of these sugary sweet Care Bear (&#174 Mrs. Giggles) ones that’s almost best to skip. Did everyone have to get paired off for a HEA after the immense treasure was located so everyone would also be filthy rich? After reading it, I guess so.

But despite the few problems I had with the story and characters, I’m thrilled that you wrote it and that I got a chance to indulge my inner “Avast Me hearties” self. Arrrrrr. B