Living in the South, I keep a close eye on the weather during hurricane season. Like right now with Hurricane Earl twitching around out there. Having lived through hurricane damage to my house, I will never take an evacuation order lightly. Which is what caught my eye about the blurb for “The Officer’s Girl.”

Blowing into town in the path of a Category 4 hurricane isn’t the new life Stephanie Bryant had in mind…especially when sexy Cocoa Beach police officer Brett Lincoln tells her she has to evacuate immediately. Or else! And now the ultra-hunky cop is monitoring her every move.

Brett knows Stephanie’s transfer to his Florida hometown is just a rung on her corporate-climbing ladder. But the petite, curly haired beauty has a way of bringing out the protector in him-‘not to mention the off-the-charts attraction that’s telling him she could be The One.

Can a small-town hero with broad shoulders and the bluest eyes this side of the Atlantic turn Stephanie’s stopover into something more permanent? 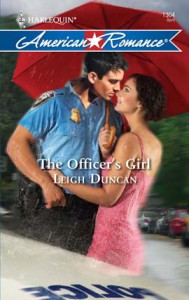 I enjoyed the smart dialogue throughout the story. Both Stephanie and Brett come off as intelligent, caring people who are good at their jobs, interested in each other and not into playing games. I also like that they know instantly that they’re attracted to the other but take the time to get to know each other before moving their relationship to higher levels. And despite the fact that there’s no sex in the book, you still managed to make it sexy.

The conflict between them is all to common today. Two career people, one with a career which might be taking her places if all her hard work pays off, trying to make enough time in their busy lives for romance and facing job promotions and transfers. As well, Brett’s career as a police officer brings him into a deadly force situation which is followed by a fundamental issue that causes Stephanie to doubt any future they could have together. Brett has to “get” how his actions, which were totally unintentional on his part, were interpreted by her, rightly I thought, and then make the decision to change things in his life which could have made them call it permanent quits.

And how about the hurricane? I hope Stephanie never finds out what a direct hit is like, especially from a Category 4 storm. The aftermath is so dead on that I feel you must have experienced it yourself. The maddening lack of AC in hot, humid post storm days, furiously grilling everything from your freezer so it won’t go to waste, worrying about running out of gasoline since the pumps don’t work, as well as the wonderful camaraderie of those in the trenches trying to chain saw their way out of their neighborhoods. I think you nailed this stuff.

Smart lead characters who act believably, a conflict which is much more than a mere Big Mis, a well done background story and good secondary characters makes me wish I’d read this in April and then had it as one of my recommendations. Well, better late than never. B+