Review: The iPad Mini, the most dangerous competitor to the iPad yet

The iPad Mini is the perfect marriage between form and function. It’s perfect for one hand, in the bed reading. Your purse, no matter what size, will be able to carry this. It might even fit in some larger inside suit coat pockets. It’s biggest competition isn’t the Kindle Fire or Google’s Nexus. It is the iPad. 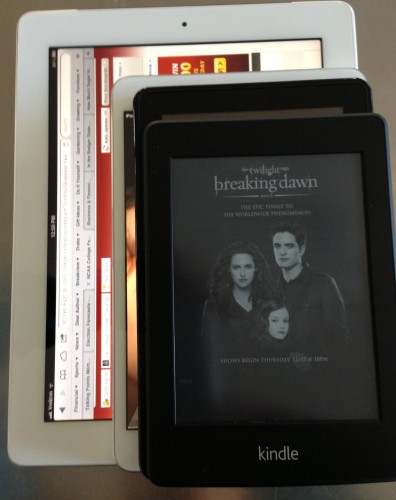 Even Apple seems to acknowledge this. On its product page, it describes how the iPad Mini is smaller, weighs less, but operates just as well as the iPad. And if you are determining whether to get the iPad Mini, you are going to end up comparing it to the iPad and not to other tablets on the market.

The main reason for this is the price. The price points for the iPad Mini v. the iPad are as follows:

*Nate at the Digital Reader reports that iPad 2 is being sold for $359 at Bestbuy, Walmart and MicroCenter.

The Kindle Fire and Nexus 7 both weigh in at $200 for the 16GB model.  The Nexus 7 has a USB OTG (On-The-Go) port that allows you to use a USB memory stick or a USB card reader for extra memory needs.

The iPad Mini is essentially a smaller iPad 2. It has the same screen resolution of 1024-by-768-pixel although because of the smaller size, there are more pixels per square inch on the Mini v. the iPad 2. They share the same A5 dual core processor. The iPad Mini has updated cameras. While the iPad Mini has two speakers, it is still not stereo sound. Finally, the iPad Mini has superior wifi and networking.

It’s important to note what the iPad Mini does not have and that is the Retina screen that is on all the new iPhones and the newest (and most expensive) version of the iPad.

When it comes to general hardware, however, the Nexus and Kindle Fire are superior. The Fire and Nexus both have HD displays; dual stereo speakers; faster processor; and supposedly faster wifi access. (You can see a spec comparison here)

Is the iPad Mini right for me?

I have never enjoyed the Android operating system as forked and installed on the Kindle Fire. This may simply be a matter of preference but at a $130 price difference, the iPad Mini doesn’t hold up well to the Fire and Nexus. If you are watching movies, surfing the web, and listening to music, the lack of a camera on your tablet isn’t likely to make you want to jump up to the iPad Mini.

Why it’s right for me.

For me, I have been waiting for the iPad Mini for some time. The iPad is too large for truly mobile use and it is too crippled in terms of function. I can write on it, but I need to bring my keyboard. I have problem doing even simple things for the blog like attaching a photo. It was too large to use to read with in bed so I thought the Kindle Fire would be an alternative and don’t get me wrong, it’s a nice tablet but I never got used to the OS. And I have far more iOS apps, having been an iPhone user since its release.

I began taking my Macbook Air with me instead and the iPad languished.  I moved away from the Kindle Fire and began reading more and more on my iPhone but the smaller screen size bothered me. The Kindle Paperwhite was released and I do think it is the best eink reader on the market but it is only an ereader.  I can’t read emails on it; surf the web; or make tweets. It’s not easy to read PDFs.

The iPad Mini is, for me, the perfect marriage of form and function.  I can carry it easily in one hand. It fits in all of my purses.  I can read, draw, tweet, and do some typing leaving the heavy word processing to my Macbook Air.

One of the really nice things about the Mini is how large the screen size is. The Kindle Fire on the left is 7″ diagonally and the iPad Mini is 7.9″  That inch difference seems huge in person.  As you can see, the side bezels of the iPad Mini are quite small, perhaps half the size of the Kindle Fire. 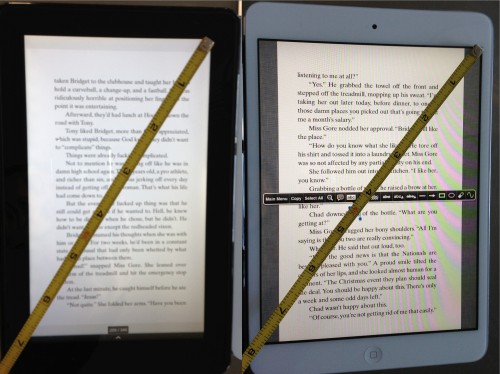 When reading PDFs, this can be meaningful. 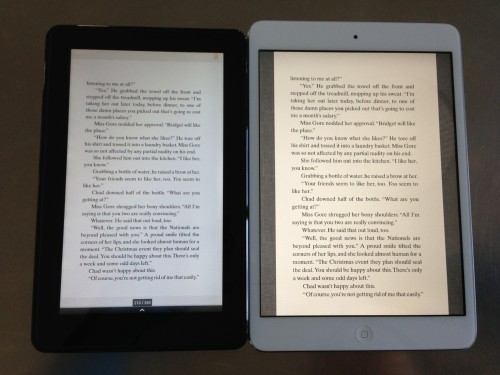 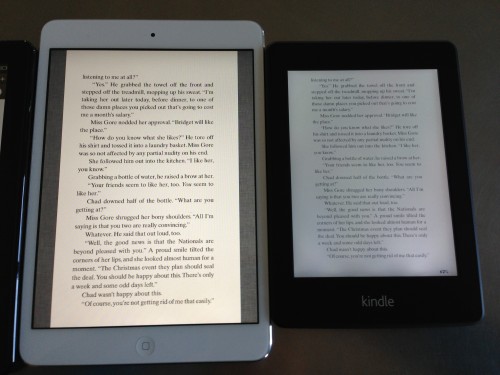 And it’s really noticeable when you are browsing: 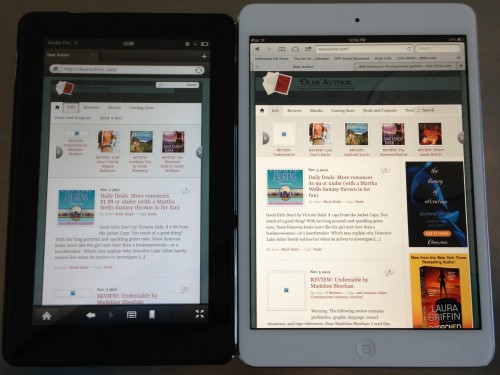 Essentially, the iPad Mini is a replacement for the iPad.  If you want to carry this device around quite a bit and you like to read at night, the iPad Mini is probably a better option than the larger and more expensive iPad 4.  Or you might choose to go with the iPad 2 with the larger screen and only slightly more money.

The good thing is you have lots of options out there.

→ Jane
Previous article: What Janine is Reading: September 2012
Next Post: REVIEW: Once a Playboy by Kate Hardy