REVIEW: The Hunter and the Hunted by Kelley Armstrong

Bitten was one of the first urban fantasy novels I read from the current subgenre that sprung up during the last decade. I loved Elena, Clay, and the world you introduced. When you expanded the Otherworld setting beyond the werewolves, I had mixed feelings. I have a weak spot for the pack. I wanted more of them and who were these witches suddenly popping up? But I understand it was a way to keep things fresh and add variety to the world. 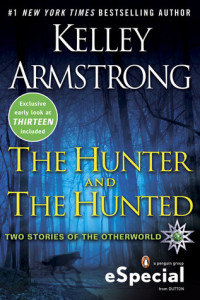 It boggles my mind that the final book in the Otherworld series is releasing soon but all things must come to an end. A pity because I consider you one of my comfort reading authors. Very little draws me back to the urban fantasy genre these days but your name has always been one of them.

The Hunter and the Hunted is an ebook only special meant to whet appetites for the final Otherworld novel, Thirteen. It contains two short stories and a special extra-long preview of Thirteen itself. Of the two short stories, only one is new. The other is a reprint from an older anthology, My Big Fat Supernatural Wedding.

The first story, “Stalked,” is the reprint. It’s about Clay and Elena as they finally take a honeymoon but encounter a complication in the form of a mutt. It was on the first page that I realized I’d already read this story and had, in fact, reviewed it for Dear Author a few years ago! Reading my review from back then, I’m surprised I liked this story. The complaints I had then still hold true and they matter a lot more to me now than then apparently. Maybe my tastes have shifted or I’ve become jaded on the subgenre, but I thought “Stalked” was mediocre. It’s difficult to gauge accurately because I have read the story before and some stories don’t withstand repeated readings. C+

The other story, “Off-Duty Angel,” is a new short story about Eve. Maybe my feelings about Eve’s character cloud my judgment but I found this story pointless. Eve is bored so her lover, Kristoff, gives her a fun assignment as a distraction but inadvertently sends her on a real mission instead. Eve’s never been my favorite character so I was hoping the plot would carry me along. Unfortunately, that didn’t really happen and when I finished, I wondered why I’d even bothered spending the time to read it. It initially seemed like we were going somewhere but alas, things fizzled towards the end. I know short stories are hard to execute well in the space allotted but I wish there’d been more meat here. C-

The two short stories make up a little over half the collection. The rest of the space is devoted to a 10-chapter preview of Thirteen.

I’ll be upfront. This collection, such that it is, is meant only for diehard fans. Two 30-page short stories and a preview, no matter how long, just is not worth $1.99. Loyal fans will probably have already read “Stalked” and only the most loyal of fans will want an extended preview and be willing to pay for it. Speaking for myself, I don’t find previews that long particularly useful because by that point, I’d want the entire book in my hands and be irritated that I don’t. Some readers might be willing to pay, however, and I’m sure this is targeted towards them.

So that’s my recommendation. If you’re an ardent Kelley Armstrong fan and need to have in your possession everything she’s ever written and need an advanced preview of Thirteen, then this is for you. Everyone else, be aware that you’d essentially be paying $1.99 for only 30 pages of new material, along with another 30 pages of reprinted material. The rest of the space is basically promotion. This is not the place for new readers to begin. Both short stories are dependent on prior knowledge of events that happen in the Otherworld books.