REVIEW: The Gladiator by Carla Capshaw 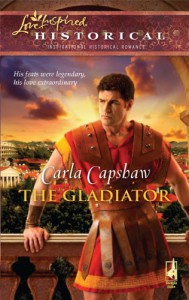 Thanks for submitting your first historical novel to Dear Author for review and thanks to Michelle Styles, whose first book I read was also a gladiator novel, for suggesting it. Today we use the phrases “thrown to the lions” or “throw ’em another Christian” in all sorts of situations but here’s a book where you actually do it.

He won his fame-‘and his freedom-‘in the gory pits of Rome’s Colosseum. Yet the greatest challenge for once-legendary gladiator Caros Viriathos comes to him through a slave. His slave, the beautiful and mysterious Pelonia Valeria. Her secret brings danger to his household but offers Caros a love like he’s never known-.

Should anyone learn she is a Christian, Pelonia will be executed. Her faith threatens not only herself, but her master. Can she convince a man who found fame through unforgiving brutality to show mercy? And when she’s ultimately given the choice, will Pelonia choose freedom or the love of a gladiator?

First off, I have to wonder at how leniently Caros treats Pelonia despite her numerous stated intentions to run away and her one attempt at it. Sure, he’s in love but, as he says regarding the jealous Lucia, he can’t afford to have anyone in the ludus or his household question his authority. So this whole part of the story, including the jealous female trope, I just had to accept and move on. Ditto on the pet tiger though you do use him imaginatively to save the day.

I appreciate the effort you put into choreographing the training and fight scenes in the story. Too often all I get is some generic “their swords clashed together” and that’s it. If the novel is about fighters, then I want some fighting action and here I got it. That being said, readers should know that the scenes in the Flavian Amphitheater might be more than they’re expecting in an inspy.

Since I come at inspirationals from a secular standpoint, I don’t want to be preached at. Sure I want to see how faith changes the characters and is part of their daily lives but I’m never looking for something along the lines of “Sinners in the Hands of an Angry God.” And as with the fight scenes, you come through in spades. Brava. What continued to strike me throughout reading this book is the immediacy of it all in a time when to be a Christian often meant a quick trip to an ugly death.

You also present the characters with all inclusive tests of faith. Pelonia gets to live the lament, “My God, my God, why hast Thou forsaken me?” She’s also forced to make a life or death decision about whether to renounce her faith and live, or stay true and be condemned. Added bonus: she’s watched Christians die in the arena and truly knows what she’s accepting when she makes her choice. Her friends are shown worrying about whether or not they’ll be turned in to the authorities thus living the question “Who can you trust?”

I think Caros’s gradual path towards his new faith seems realistic. At first, he’s just going to listen to Pelonia because, basically, he thinks it will get him laid. His change of heart is slow and due to incremental exposure to this faith which might offer redemption to even a former gladiator who, despite the adoring throngs of women, historically was fairly low on the social totem pole of Roman life. Added bonus two: his past, as an actual fighter in the arena, as well as a currently being a lanista who had supplied fighters who had killed Christians, beefs up the conflict between Pelonia and himself. Can she forgive this, as Jesus instructs? Added bonus three: Pelonia has to wrestle with her doubts and faltering moments of faith.

From early in the book, I had a feeling where the story was headed and I wasn’t wrong. But I do have a question. Now that Caros has saved Pelonia and committed himself to Christ, what’s going to happen to them? She’s been outed to the authorities and her evil uncle is still alive, though his power will undoubtedly be curtailed thanks to the political maneuverings of the Senator. I can’t see Pelonia and Caros being safe in Rome anymore – or anywhere in the Empire for that matter.

Books set in Rome were once few and far between. Thankfully, the setting appears to gaining popularity now. Yours is the first inspy I’ve read from Harlequin employing this setting but I hope it won’t be the last.