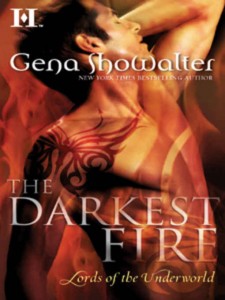 Although your previous works haven’t worked as well for me as I’d hoped, I was intrigued when I heard about your new series, The Lords of the Underworld. Pandora’s box? Hell? A horde of ravenous demons? Not only did the premise feature some of my favorite story elements, it sounded fresh and original, and that encouraged me to give your work another try.

In exchange for saving his beloved wife’s life, Geryon sold his soul to Lucifer. Now trapped in a demonic body, he guards the gates of hell, making certain the demons held prisoner cannot escape. Kadence is the goddess (or angel — the labels are used interchangeably, which I found a little confusing because I don’t equate the two) of oppression and was sent by the gods to watch the wall. Over the years, she’s become bonded to it. It’s through this connection that she realizes the wall is weakening and the demons contained within will soon escape.

I know it’s been said before here at DA, but I definitely agree. One of most difficult things about novellas is telling a fully-fleshed out story that fits within the shorter length. There’s simply not enough space to explore the story the way you can in a full-length novel. In this particular case, while I think the characters are nicely developed, the plot is a little shaky, especially towards the end.

That said, developed characters don’t always mean consistency. Even though I found Geryon consistent from start to finish, sometimes Kadence’s actions and thought processes made me raise my eyebrows. She struck me as too timid to be the goddess of oppression, which contributed to my perception of her inconsistent character. Halfway through, she embraces her innate nature but there just wasn’t enough development from her original tentative nature to her final dominant one to make me believe in her character evolution.

I thought the plot and conflict was set up well but as I find often happens with novellas, the ending was rushed and confusing. It didn’t leave the impact I expected, given the stakes involved. The wall is on the verge of collapse. The demon horde might escape to wreak havoc. Even Lucifer is given free reign on earth for a year. I consider those things very high stakes so I expected a proportionally dramatic climax and finish. The ending here, however, just didn’t deliver it to me.

As for the ending itself, I now fully empathize with many readers’ reactions to the main couple’s ending in J.R. Ward’s Lover Unbound. I should have expected it as this novella is a prequel to the Lords of the Underworld series and I think the series premise hints at the sort of ending you’d get in a prequel. Even so, I was still left with a giant WTF reaction.

In what seems to be an ongoing theme with me, I did like the idea of their romance. It reminded me of Beauty and the Beast, except the Beast never regains his handsome form and remains demonic from start to finish. I do think there’s something lovely in a romance between a man trapped in the body of a demon and a goddess ostracized by her peers, but the overall story and its resolution prevented me from enjoying it fully. C

*Jia is away for a while and will not be able to respond to comments.

→ Jia
Previous article: My First Sale by Roxanne St. Claire, Starstruck
Next Post: Because We All Need a Good Laugh