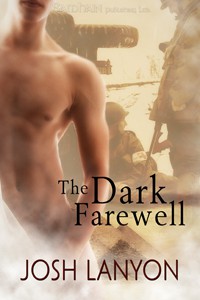 As our interview with Lorelie Brown says, the Roaring Twenties/Prohibition seems to be “in” now. I know I’ve just recently got three books set in this era and I couldn’t be happier about it. When Samhain offered us your latest novella, “The Dark Farewell,” I jumped at it. But despite a good start, it ultimately ended up being a disappointment for me.

Don't talk to strangers, young man-‘especially the dead ones.

It's the Roaring Twenties. Skirts are short, crime is rampant and booze is in short supply. Prohibition has hit Little Egypt, where newspaperman David Flynn has come to do a follow-up story on the Herren Massacre. The massacre isn't the only news in town though. Spiritualist medium Julian Devereux claims to speak to the dead-‘and he charges a pretty penny for it.

Flynn knows a phoney when he sees one, and he's convinced Devereux is as fake as a cigar store Indian. But the reluctant attraction he feels for the deceptively soft, not-his-type Julian is as real as it gets.

Suddenly Julian begins to have authentic, bloodstained visions of a serial killer, and the cynical Mr. Flynn finds himself willing to defend Julian with not only his life, but his body.

The story starts well and caught my attention from the get go. It has good “period feel” and detail without detailing too much. It feels real and natural instead of contrived and being a way to show off all your research.

There’s a mix of interesting people in it with bits and pieces of their characters, pasts and backstories shown at a realistic rate and rhythm – no info dumping about people or events. And they kept my interest throughout the story which is always good.

I was a bit alarmed at all the subplots but they seemed to be balanced and adroitly handled until the last few chapters when time began to run out and the pace needed to be picked up. And then, it rushed too quickly to an unsatisfying conclusion. I don’t want to give spoilers but suffice it to say that the main mystery was abruptly concluded and the main relationship zipped by too quickly as well. Plus there are plot points which aren’t decisively finished off.

The killer is finally identified and then – bam! – the story is basically over. I needed just a little postcript or something detailing what people thought of it or … something. It just cut off and even the resolution of the impediments to Flynn’s romantic relationship distressed me.

For a story which grabbed my attention from the start, this one ended with me wishing for more. Even an additional 10 pages might have helped here. So I’d give it a good grade for the characters and setting and a lower grade for the resolution which averages to a C+.