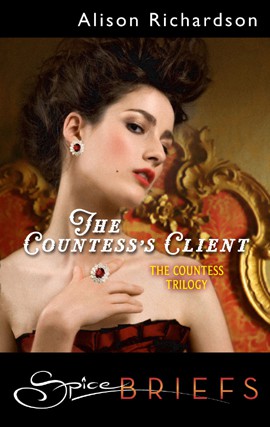 When your Countess Trilogy was recently recommended to me by no less than three friends, I sat up and took notice. I quickly purchased the first of the three stories, downloaded it to my Sony reader, and devoured it.

The practice of genuine virtue leads to a life of odious boredom–of that there can be no question, and I cannot imagine that there is a woman alive who honestly aspires to the unhealthy ideal of true feminine chastity. The appearance of virtue, however, is a very useful thing.

So begins the first story (a Harlequin Spice Brief), The Countess’s Client. The year is 1785; Anna, the widowed German Countess von Esslin, is the narrator, and she is a very different kind of heroine.

In order to fulfill her sexual appetites, Anna has often turned to soldiers. Since she is “the only daughter of Fredrick the Great’s most famous general,” and “Everyone knows that fucking the general’s daughter is a hanging offense in the Prussian army,” she feels secure in the knowledge that army men will keep their mouth shut, and thus can be counted on to satisfy her while maintaining the impression that she is chaste.

The story begins when Anna journeys to Paris with an elderly aunt so as to visit her cousin Robert, who resides there. Abstinence is difficult for the young countess, but what is a girl to do when there are no soldiers to seduce?

This problem is solved after Anna catches her cousin with a prostitute at his house. Robert is so relieved that Anna doesn’t condemn him that he invites her along on his weekly visit to a brothel. All the prostitutes at the establishment owned by Madame Barthez are female, and Anna is only attracted to men, so she fears at first that the sole pleasure to be had at the place is voyeurism.

But that fear is allayed when Anna learns that there is one customer, a foreigner, whom the girls don’t like to service because he is no aristocrat and because his tastes are so plebian. In this Anna sees the solution to her problem: she will pose as a lady of the night, service the man, and satisfy her sexual hunger in the process. The man, thinking she is nothing more than a whore, will not spread any gossip about the Countess von Esslin, and since he is a commoner, they will likely never encounter each other outside the brothel, so Anna’s reputation will remain spotless and safe.

Not only is Anna somewhat free with her sexual favors, she is also, not to put too fine a point on it, a snob. She believes she is better than the commoners she sleeps with, a fact that gets her into trouble in this story. Nonetheless, I found myself liking her, partly because she was a woman who knew what she wanted and went after it, and partly because I found myself laughing out loud at her boldness.

The jury for me is still out on Anna’s lover, the Scottish scientist James McKirnan. He is certainly intelligent and sexy, but I think it is debatable whether or not the last sex scene in the story is consensual. But for me, this did not detract from the bitingly humorous tone of the story, and since the prose was smooth and the characters intriguingly flawed, I enjoyed The Countess’s Client.

My understanding is that Anna’s story continues in An Impolite Seduction and concludes with a happy ending in The Birthday Present. I will be reading further to see where things go for Anna and James. B for The Countess’s Client.

→ Janine
Previous article: Kindle Prices Are Low (weirdly low in my opinion but take advantage of it)
Next Post: What I Am Currently Reading …