Almost two years ago, I reviewed the first book in your series about the McBain’s of Grace Harbour, “The Chef’s Choice.” You mentioned that the next book wouldn’t be out for a while. Well, you were right but I still remembered the series and picked up “The Boss’s Proposal” when I saw it. 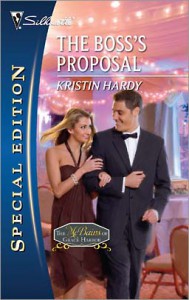 Max McBain, despite her masculine sounding name, is a beautiful blonde with a ton of talent. She’s worked for seven years at the BRS architecture firm and it looks like her efforts are about to pay off. The architect who was slated to head the bid for the new addition to the Portland General Medical Center has jumped ship and Max can almost taste her promotion now.

That is until she arrives for work and discovers that the man she flirted with the night before at the benefit to raise money for the new oncology center is actually the boss’s son and he’s going to take over the project. Dylan Reynolds quickly catches on to the fact that Max expects she can flirt and schmooze her way around him to get the design the way she wants it. And yeah she’s smart and a damn good architect but he’s going to run this show and have some fun flirting back before they wrap the bid and he heads back to his current project in Dubai. But is there a chance at love they’re missing as they work out the details for their presentation?

In “The Chef’s Proposal” you had a chef fall for a landscaper and actually included details about their professions. Bliss. Here it’s two architects with differing visions for their proposal who are your hero and heroine. And again you make their work integral to their lives and to the story. Thank you. And it’s nice to revisit Cady and Damon as they prepare for their wedding and think seriously of just eloping to Vegas to avoid the hassle.

There is instant chemistry between Max and Dylan as well as instant conflict. I like that neither turns into a lust puddle even if Dylan does push my comfort envelope with his hands on flirting. If Max hadn’t already shown her interest enough for him to feel confident of not getting slapped with a harassment warning, some of their early scenes could have stepped slightly over my line. But Max is a strong enough character to hold her own both personally and professionally for most of the book.

Alas I lose a bit of respect for Dylan when word of their office affair leaks out and it takes a toll on Max. I just didn’t see that he ever truly “got” how damaging this could be to her career. And the way everything is taken care of by their plans to start their own firm only appears to brush it still further under the rug rather than actually deal with it. Dylan redeems himself some by his care and thoughtfulness during Max’s father’s hospitalization but not quite enough to cancel that first bit out.

While for me this book doesn’t equal the first in the series, I hope that your editor will let you carry on and write a story for Max’s brother Walker. Now there’s a man who has already been put through the wringer and deserves his shot at a HEA. C+