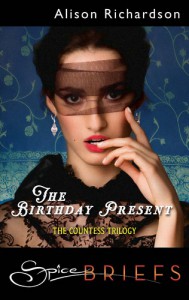 I had a blast reading The Birthday Present, the third and final story in your Countess Trilogy. To readers who have not read the earlier stories, but would like to read this one, I have to suggest reading this series in order.

Like The Countess’s Client and An Impolite Seduction, The Birthday Present is a Harlequin Spice Brief set in the late eighteenth century and narrated by its heroine, Anna, Countess von Esslin, who details her sexual adventures and her encounters with the Scottish scientist James McKirnan. James is a thorn in Anna’s side, but he makes her hot as well as bothered.

It’s been fourteen years since James and Anna first met in a Paris brothel and eleven years since their encounter in Derbyshire. Both are now living in Munich, since it is where Anna prefers to live and since she had, in retaliation for James’s actions in the earlier stories, spread rumors about him that made it difficult for him to live anywhere else.

Anna’s thirty-fourth birthday has arrived, and although she is the hostess of a popular salon, she feels dissatisfied. As she explains:

Most of the regular visitors to my salon were either distinguished old men or energetic young artists and scholars. The former held no interest for me for reasons that should be obvious, and the latter, if more appealing in physical form, proved equally unsatisfying when consumed as a regular diet. The new, romantic generation was far too high-strung and sensitive for my tastes–young men bored me, though they clustered around me like gnats and, after a few years in Munich, the thought of spreading my thighs for yet another adoring and submissive young poet was enough to make me cry with frustration.

Anna’s celibacy has lasted for two years, and she is therefore morose when she is invited to King Maximillian Joseph’s first court ball. Her birthday falls on this same night. At the ball, James McKirnan insists on a dance with her, and since he has some influence with the royals despite his common birth, Anna cannot afford to snub him in public.

Therefore, Anna dances and spars with her enemy. The banter between the two is delicious:

“Will I ever get anything but frowns from you, Countess?” James had just asked me in his usual light, mocking manner. He was leading me through the first steps of a complicated rondeau.

I told him coldly that if he ever did anything to earn a smile from me, I would certainly not withhold it.

Before James can reply, the dance is interrupted by Anna’s cousin Robert, who wants to present her with a birthday gift elsewhere in the palace. Robert claims his present is what Anna wants most in the world. He leads her to a closed door in the Palace’s east wing, and insists on blindfolding her, saying that he cannot give her this gift if she refuses to wear the blindfold.

Anna’s curiosity gets the better of her and she agrees to Robert’s condition. Inside the room, she encounters a nude, well-muscled and aroused man who gives her the vigorous, satisfying sex she has been craving. But one encounter is not enough for Anna, and she asks Robert to set up another.

Will Anna uncover her secret lover’s identity? Will the man satisfy her again? And how will Anna’s contest of wills with the Scotsman who is the bane of her existence resolve itself?

In my review of The Countess’s Client I said that the jury was still out on James, but between the second story and this one, he has won me over.

One of the most satisfying things in this story was the way Anna and James remained true to themselves yet had matured and softened a little with the passage of time. I liked that both remained two strong-willed people; that Anna’s snobbery did not disappear overnight and that her sexual appetite is here to stay. She is only a bit less entrenched in her views at the end of the trilogy than she was in the beginning, but that bit is enough for me to believe in the happy ending.

And speaking of the ending, although it was not a traditional HEA, I thought it was perfect for these characters. It made me hoot with laughter, and spread a silly grin across my face, too. A- for The Birthday Present.