“A whopping multi-million-dollar inheritance should have been Carolina Daniels’s dream come true. Instead, the money brought nothing but vultures looking for their share of the wealth. Fortunately for her, the generous gift also came with a rescuer: sexy billionaire Maguire Cochran.

Instinct told Maguire that the generous inheritance his father had given Carolina for saving his youngest son would send her running for help. His plan? To be her “knight in shining armor” and show her how to toughen up. Whisking her off for a luxurious getaway-‘complete with a romantic dinner or two-‘was all part of the arrangement. But letting the considerate, passionate schoolteacher give him a lesson in love-‘and transform his heart-‘was not….”

I’ll admit that it’s your name on this book which made me give it a second look. That and the fact that it’s from the Special Edition Line which generally tells me that any rich heroes won’t turn out to be despicable morons while the not-as-rich heroines have some strength to their spines. As for the rest of the plot, I knew I’d just have to buy into it and go along for the ride. 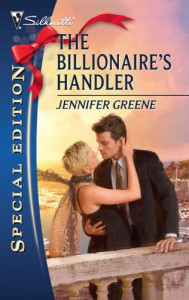 I do have a slight niggle about how Maguire busts in and “rescues” Carolina and a slightly skeevy feeling that he’d been watching over her and having her checked on. But he truly does have her interests at heart. Still… he’s a bit of a control freak – which is made more understandable with his upbringing, businessman’s persona and his family who won’t act maturely. So it’s funny to see her turn the tables on him, seduce him, and control him. I love it when she tells him to “take being seduced like a man.” Very funny moments here and it keeps him from being the asshole CEO type. The fact that early on you give her emotional power over him balances the initial set up. He might be tough workaholic but deep down, he’s putty in her hands from the start.

Maguire exemplifies Noblesse Oblige as opposed to most of his family. So he wants to keep Carolina at arm’s length because of that. She’s under his protection so she’s off limits. Even if it kills him. Brava that she takes control of their sexual relationship and tells him that it’s what SHE wants and needs and enjoys and he can either get with the program and enjoy it with her or not but she’s not feeling used or guilty. There are no apologies for her being a sexual being nor any “I’ve never experienced an orgasm til I met you” moments. Oh, thank you for that.

The story centers on an interesting plot angle – sudden wealth and how it will change a person and those around them. Who doesn’t dream of this but then who hasn’t heard all the horror stories of how it can ruin your life if you’re not careful? In the end, Carolina gets stronger and becomes tougher about giving til it hurts – personally, mainly, but also financially. I think it’s realistic that her family hasn’t changed much – no sudden Happy Bunny/group hug moments – which makes sense. And even she still hasn’t become a coconut who’s immune from entreaties but she’s learned something about what wealth can do for or against you and how to deal with it.

Maguire and Carolina both grow as people and help make the other one a better, stronger person. He teaches her big money handling and how to set boundaries and protect herself and she teaches him to open up to the possibility of love and risks of love.

A fun aspect of the book is that in the last part both play dirty to get the other – a sexy T-shirt, tree house books, a dog, a designer shoe catalogue – but these are things that they know would appeal to the other – cute, fun things. Which goes along with how they can slyly joke and tease each other.

In the end, she realizes that no place will be home without him and makes sure that he knows deep down, the money hasn’t changed her personality. Carolina makes Maguire examine his life and why he’s never written a wish list. Unlocking his own emotions and asking for himself just as he makes her buy shoes for herself. And you can’t beat a guy who insists that you buy some designer shoes! B