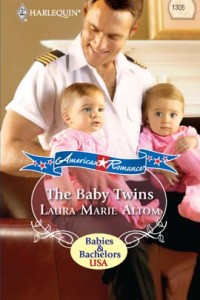 As someone who cheerfully admits that if I ever got on another airplane, I’d probably be the one who wigged out and caused the air marshals to be called in, the blurb of this book caught my attention. A heroine who freaks out at 30,000 feet. Hey, I can relate! The babies didn’t interest me so much but the hero sounded intriguing as well so I thought, WTF?

A pilot’s widow, Stephanie Olmstead isn’t afraid of flying…until the plane takes off, triggering a panic attack! Suddenly, the single mother of twins has a new man in her life. Brady McGuire, the pilot who saved her from a major meltdown, now sees himself as her protector. And friend.

Between flying and moving across the country to be closer to his daughter, Brady’s life is hectic enough. But ever since he played hero, he can’t stay away from the gorgeous single mom and her infant girls. That’s when things start happening really fast. But is Stephanie ready to move on? Brady has his doubts. One thing’s for sure, it’s going to be a bumpy ride!

That’s one interesting opening with a full blown panic attack requiring calling in the troops to interrogate her and the entire plane of people after she was put in flex cuffs. That’s a new one on me. I’m just curious as to whether or not she’d end up on some official list of “no fly” people or if her case would be dismissed as a one-off? It doesn’t seem to hinder her getting on several planes throughout the story.

Despite the title, the twins aren’t front and center in the story. More time seems to be spent on Brady’s older daughter Lola and Stephanie seems able to park the twins at a moments notice with several friends so she can jet off or do things with Brady around the city. And how does a single mother with twins under age one and a full time business have so much free time? I have friends with one baby who’d love to know the secret of her time management skills.

Stephanie is quick with advice for Brady about how to mend his relationship with his daughter and how he could have been at fault with the breakup of his first marriage but she’s very resistant to taking any for her own issues. In return Brady is bluntly honest with her about how he doesn’t think she needs to be flying instead of pussyfooting around the subject like some of her friends. But then given the way she turns into a watering pot every other minute, I can see why they’d step carefully.

You give Brady an “all you can eat” plateful of conflict. The end of his first marriage, his current snipping with his former wife, Clarissa, and her new husband – someone Brady knows and resents like hell, and his distant relationship with his daughter. You did a good job making him partly responsible for his marital problems without turning him into a villain since he honestly thought that his long hours at work was a positive thing which allowed him to support his wife and child. While I’m glad he finally acknowledges his part in the breakup of his first marriage and seems determined to mend his ways with his daughter, at least, I still have a hard time accepting that the next Thanksgiving or Christmas celebration won’t still have a degree of tension in the air especially after Clarissa’s numerous comments about Brady and Stephanie. A simple, “gee I’m sorry” doesn’t cut it after some of the things that woman said.

Then there’s Brady and Stephanie’s relationship. At first, they’re just friends and Stephanie almost shoots Brady down for suggestion a simple phone number exchange. Suddenly Brady starts showing up in Arkansas all the time and pushing for more. Stephanie resists, strongly resists, and scoffs at them dating all the while continuously bringing up her first husband. Then – suddenly – she’s hot for not only a relationship but marriage. Even without her commitment challenges, I had a hard time with this. I’m with her sister Lisa, it’s too much too soon.

Stephanie snaps and barks at people a lot. Again, not something I’m used to seeing in a Harlequin heroine. Bully for you in taking a chance on her and on her blowing off the well meaning advice of her friends and family – advice I happened to agree with. But you can’t make a horse drink and Stephanie won’t listen until her near total breakdown at the wedding. Wow, that’s quite a breakdown. I’m still debating which one was worse – the plane or the church. At least she couldn’t have crashed the church. However, she did finally get the hint that she wasn’t ready to marry again without some counseling.

The resolution of the final internal conflict for Stephanie is fairly fast. A miracle breakthrough and voila! she’s on her way to being mentally ready to marry again. Good for her even if I don’t buy it or Brady’s reaction to her contrite apology at his hotel door in the early hours of the morning. Twue lurve with hearts and flowers all over the place.

As I mentioned, there’s lots of conflicts here. Stephanie not being over her husband’s death and fearing closeness with another man only to potentially lose him, Brady’s conflict with his first wife and her new husband and with his daughter who is torn between those two and Brady and Stephanie being ready to get married. Though I applaud the chances and risks you take with the story, I have to say that the resolutions are just too pat and easy.

I can start a book not liking one or both of the main characters. I can continue a long way into a book still feeling that same way as long as I see something in either or both characters to make me think things will change. I started liking Brady and was glad to watch him rebuild his relationship with his daughter and start to come to terms with his first marriage. I didn’t care for Stephanie, didn’t warm up to her, don’t believe her sudden changes and actually feel sorry for Brady being stuck with her. Not a good sign or a good grade.